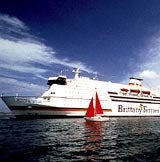 Banks Hoggins, which has held the account since 1999, was one of four agencies that pitched for the account through the AAR. Also on the pitch list were HDM and RH Agency.

Although both The Walker Agency and Clilverd Booth Lockett Makin list Condor Ferries as clients, it is understood that no conflict arises as the two ferry companies have several joint ventures. Walker has held the Condor account since 1994.

Prior to Banks Hoggins taking the Brittany account in 1999 it was held by Communications In Business for 20 years.

The review follows a reshuffle at the beginning of the year, when its then head of marketing, David Longden, was promoted to managing director UK and Ireland, and Richard Price was promoted from marketing manager to head of the department.

The next advertising for the ferry company is likely to break this autumn.

Brittany Ferries has had to combat increasing competition from P&O and the Channel Tunnel, with recent ad campaigns adopting a travel writing style to give consumers information about different French regions.