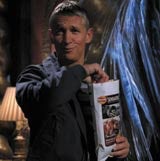 Walkers Snacks, the PepsiCo-owned food company, has promoted Jon Goldstone to the role of chief marketer for the division. He was previously marketing director for evening snacking.

Goldstone is filling a post that has been vacant since Campbell was promoted to the wider PepsiCo marketing role in October 2003.

The changes are part of a reorganisation of PepsiCo UK and Ireland into two units alongside Walkers. The company has promoted impulse retail director Mary Barnard to general manager for the Quaker, Tropicana and PJ division. Also, Peter Gutierrez, who has held a variety of marketing roles at the company, has been invited to head the Pepsi division.

Goldstone has been with Walkers for five years in a variety of positions, including marketing manager for Doritos. He was responsible for the launch of Sensations in his evening snacking role and more recently has been looking after innovation across the portfolio of brands and Quaker in particular.

He was responsible for the launch of Nobby’s (MW February 3) and Quaker Season (MW October 14, 2004). Prior to joining Walkers, Goldstone held a variety of marketing roles at Kraft Foods, Coca-Cola and Campbell’s.

WCRS has been knocked off the shortlist for Heineken’s Â£40m global advertising brief.

Ferrero is launching a block chocolate bar, called Kinder Country aimed at young children. The bar, which will be available from this autumn, is a key launch for Kinder. The 23.5g bar, which has bits of crispy cereal inside it, is already available in Europe. Ferrero has launched a number of products in the UK […]

Dixons’ decision to close the shutters on 35mm cameras and focus on selling digital models is part of a strategy to keep pace with cutting-edge technology. It is a strategy likely to result in the disappearance of many more products from its shelves. Last year the chain axed VCRs when it became clear that consumers […]