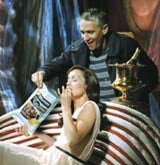 Snack brand Walkers Sensations launches an advertising campaign this week to promote its new flavour – roast onion and balsamic vinegar. The ad, created by Abbott Mead Vickers.BBDO and directed by Paul Weiland, of Mr Bean fame, features Tara Palmer-Tompkinson tucking into the new variant. She is shown indulging in some ‘me-time’ as she crunches away on the new snack, but her enjoyment is so intense that she falls back into an onion-shaped chaise longue in slow motion. While she is preoccupied with savouring the flavours, Gary Lineker sneaks in behind her and snatches the bag away. Media was planned and bought by OMD UK.