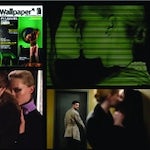 The design and style magazine, published by IPC Media, is launching a short film titled “Quatre” as part of its “sex-rated” September issue.

The three-minute film combines sex, fashion and furniture in what IPC calls a “very Wallpaper* fantasy”.

The full film can be viewed online and stills will feature in a 12-page fashion segment of thee magazine.

The film collaboration comes hot on the heels of a number of initiatives from Wallpaper magazine to launch one off special edition issues.

In July the title launched a “handmade issue” with 21,000 unique covers printed on seven different paper stocks and only featuring objects commissioned by the magazine.

The magazine has also incited readers to create their own covers and produced an issue of the magazine on location from Brazil.