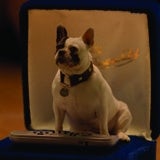 Wall’s is reviving its dog character as part of an integrated campaign to create a new generation of fans of the brand.

Wall’s is using the miniature pug-dog, called Allan, as an outlet for men’s feelings of gratitude to being served Wall’s sausages.

The ad campaign builds on the idea that the British are reserved and not able to express emotions, which Kerry Foods group marketing director Phil Chapman claims fits into the masculine skew of Wall’s audience.

The 30-second ads, created by Saatchi & Saatchi, break on 21 May during Britain’s Got Talent.

Wall’s had used a dog character in its advertising since 1993, but it has been absent for three years.

Chapman adds: “The change is a strategic change for the foreseeable future. The Wall’s dog was a powerful property – almost bigger than the Wall’s brand name, but the role of the character got confused and weakened. It was memorable and not clear.”

“The challenge was how to bring it back in a way that’s relevant, not just lipservice.”
The ad is part of a £4m investment in brand marketing this year. Wall’s will also launch digital and social media activity later in the summer but would not reveal any further details at this time.

Wall’s currently has a 5% share of the UK sausage market and reports around £80m in annual retail sales.

It is the latest of Kerry Foods’ brand portfolio to be refreshed as part of a two year strategy to focus on the consumer insights that drive growth. The company has already revamped its Cheese Strings, Richmond, Mattessons and Low Low cheese brands, and plans to continue sharpening their brand messaging to build the business.