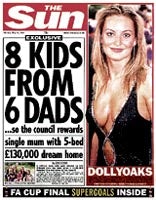 Executives at The Sun are positively beaming about the success of a sponsorship deal between their comic strip football team Warbury Warriors and Virgin Mobile.

In a survey of sponsorship awareness among Sun readers, Manchester United (Vodafone), Everton (One2One), and Middlesbrough (Cellnet) all trailed Warbury, which signed up Virgin last month.

But then, as one executive says: “We’re averaging gates of more than 3.5 million – no Premiership side can compete with that.”