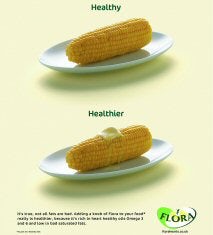 Unilever Bestfoods has been blasted by the Advertising Standards Authority (ASA) for claiming that a knob of its Flora margarine makes vegetables healthier.

The ASA has ruled that a poster and magazine ad for Flora was misleading. The ad shows two sweetcorn cobs, one with nothing on it and the other with Flora on it. The caption on the first picture says “healthy” and on the second it says “healthier”.

At the bottom of the ad, it also says: “It’s true, not all fats are bad. Adding a knob of Flora to your food really is healthier, because it’s rich in heart healthy oils Omega 3 and 6 and low in bad saturated fats”.

• The ASA has upheld complaints from Dairy Crest, The Food Commission and members of the public, ruling that adding Flora to a vegetable cannot make it healthier than a plain vegetable. But it rejected complaints that questioned whether Omega 3 and 6 oils are “heart healthy”, ruling that current evidence backs up the claim.• The ASA has also ruled that Thorpe Park, the theme park owned by Tussauds Group, was irresponsible for running a promotion encouraging people to “take a September sickie”. The promotion aimed to encourage people to take advantage of discounted tickets. The promotion was flagged up on Thorpe Park’s website, with links to a “September Sickie” page.

NTL is planning to launch a series of Virgin-branded television channels after its rebrand to Virgin Media next February. In an interview with Marketing Week, NTL managing director of brands Ashley Stockwell says the cable company is looking to …

A new press advertisement for cider brand Magners aims to get readers in the Christmas spirit with LED lights that will twinkle when a page is turned. The ad, which features a snowy Christmas scene, will build on Magners’ “apple orchard” campaign, which shows the cycle of growing apples and making cider. The press ad […]