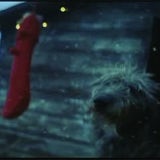 The regulator received more than 300 complaints that the ad represented an animal being treated badly and left in unacceptable conditions. Nearly 100 complaints were also made that the ad undermined children’s belief in “the magic of Christmas” as it showed grown-ups wrapping presents.

John Lewis said that it was cutting the scene featuring the dog from its 30 second ad but it was being retained in the 60 second version for the scheduled run of the campaign up to 18 December. It added: “Our intention was to portray a poignant moment where the little boy shows affection for his dog by putting a stocking on his kennel. We are genuinely sorry if this scene has caused any concern.”

These include: “Yes dogs can live outside but should have adequate warmth and shelter in winter – the one in the ad doesn’t” and “the kennel that is shown in this advert does not meet these standards, it is way too small for the dog, and is open to the elements. Yes, I know it’s only an advert, but anybody who kept a dog in those conditions in real life would be liable for prosecution.”

One defending comment reads: “I sincerely hope that John Lewis keep showing the full length advert, as they appear to be doing, because to give in people who have a warped view of reality and enough keyboard skills to create a Facebook page means that no marketing material is safe from fringe views.”