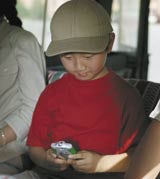 Marketing and advertising to children is the cause of much concern among parent groups and schools. This was reiterated last week when the National Consumer Council joined the voices calling for a ban on advertising food and drink to pre-school children.

Concern about this issue led to the introduction last year of MediaSmart, a Government-backed self-regulation initiative. The scheme, which is also backed by high-profile advertisers such as Mars, aims to educate children about how television advertising works (MW October 31, 2001).

New research from child research specialist ChildWise shows that, despite the growth in new technologies, TV remains the dominant medium in children’s lives.

The relationship between children and TV is a close one. It permeates all aspects of their lives and is crucial in forming their decision on toys, games, websites and magazines. Their responses to pop stars and other celebrities are also influenced by the personalities’ exposure on TV, and TV is the main source of raw material for discussions with their peers.

The survey shows that children watch an average of 2.8 hours of TV a day – the same amount they watched in 1994. TV viewing generally increases as children get older, with 11- to 16-year-olds watching 3.2 hours a day. The peak TV ages are 13 and 14, when children spend 3.5 hours daily in front of the box.

The fact that the amount of time children spend watching TV hasn’t changed much in the past decade masks changes in viewing behaviour, as children accommodate to new technologies and changing TV output. The times at which they are viewing have shifted and extended. The peak in children’s viewing is no longer concentrated after school, as children’s programming is increasingly shown in the mornings: the survey shows that 65 per cent of five- to 16-year-olds watch TV before school.

Dedicated children’s channels also offer longer viewing hours, in some cases 24 hours a day, plus regular repeats. This is changing children’s attitudes towards making “appointments to view”. But children do appreciate the targeted nature of these channels, which are often aimed at specific sectors, segmented by age, gender or interest.

Children know exactly where to find output to suit their particular needs, whenever they want it, without running the risk of exposure to anything that could be construed as boring. And parents are giving their children free run of such channels from an ever-earlier age. The ChildWise survey shows that 72 per cent of five- to ten-year-olds had watched one of the specialist children’s channels in the past week, as had 62 per cent of 11- to 16-year-olds.

New technologies may not have eaten into TV viewing hours yet, but they are widely in evidence, often in children’s own bedrooms. The survey shows that 86 per cent of five- to 16-year-olds have a computer at home. More than a third – 36 per cent – of children have their own PC or laptop, and 74 per cent have internet access at home. Children use the internet two or three times a week, but as with television viewing, this increases with age. The average online session lasts for just over an hour and a half, rising from an hour and 20 minutes for five- to ten-year-olds to an hour and 40 minutes for 11- to 16-year-olds.

New technologies, then, currently sit alongside television, rather than displacing it. Children are increasingly adept at scanning across a variety of media (in the same way that they flick through TV channels) to select the things that appeal most to them. They use the different technologies to provide a constantly accessible menu of entertainment, enabling them to switch between sources according to what is on offer, and to track their favourites.

With this multiplicity of sources, and access to their own equipment, children have increasing control of their media consumption. Many parents really do not know much about what their children watch on TV, or the websites they visit, relying instead on trust and some simple rules about disclosure and time spent in front of the screen.