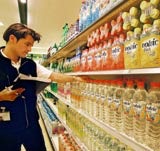 The recent chemical contamination issue involving Danone’s bottled water brand Volvic was efficiently dealt with by the company. Thanks to some rapid communication from head office to retailers, the drinks industry stood down from red alert almost as soon as details of the scare were published, and the message was repeated to all enquirers: “Just a one-off isolated incident – nothing to see here”.

But questions remain about soft drinks companies’ future handling of health scares, and the propensity of bottled water to be contaminated in transit or storage. How seriously the sector takes the issue is up to manufacturers and the industry’s trade body.

It has come to light that Lauri Pastrone, the mother-of-two who initiated the investigation by claiming her six-pack of Volvic “smelt off” and left a “burning sensation” in her throat after consumption, stored the bottles next to other products for about two months before reporting the problem. The water was later found to contain small traces of naphthalene.

Even though Danone might not be directly at fault, this is not the first time bottled water brands have been hit by contamination scares. Coca-Cola’s &£7m UK launch of Dasani was scrapped following the disclosure that it contained more than twice the safe level of cancer-causing chemical bromate. And in 1990, Perrier recalled 160 million bottles worldwide after traces of carcinogenic agent benzene were detected.

When tests showed the naphthalene was likely to have penetrated the Volvic plastic after it left the factory and at some point in delivery or storage, Danone urged customers not to store bottles in the same cupboard as cleaning products or other chemical-based substances, such as paint, fearing they could penetrate the plastic.

Andrew Mills, professor of chemistry at Strathclyde University, confirms this is possible. He says: “Traces of naphthalene could transfer through the plastic over a matter of days, but it’s highly unlikely that there was enough to have done harm to anyone. However, we are able to pick up the taste of some chemicals, even at low levels. Glass would be a better barrier to permeation than plastic.”

With that in mind, Danone is painting the issue as one for the entire industry, as all soft drinks in the UK are bottled using the same PET plastic. A spokeswoman says: “We are working with the British Soft Drinks Association (BSDA) to establish what, if any, additional guidelines should be given to retailers and consumers regarding the storage of bottled water and other soft drinks. This is not a health risk but an issue of quality.”

BSDA marketing manager Richard Laming says an investigation will proceed – but not for a while. He states the BSDA’s bottled waters and packaging committees will not be able to look at the issue until January, adding: “We will consider whether changes to warnings on labels must be made. Two things need to be considered: the seriousness of the contamination and the frequency with which it happens. But I think this is a very rare occurrence.”

A seeming lack of urgency on the part of the industry body suggests this issue will be swept under the carpet. The expense of all soft drinks companies switching to glass bottles may seem too high a price to pay – except that leaving the next contamination to chance could have more serious consequences.