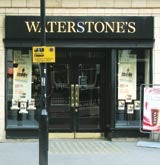 Waterstone’s is talking to advertising agencies with a view to using them on potential future briefs.

The bookseller does not have a retained agency, but has worked with agencies Beechwood and Conran Design on past campaigns.

Although it produces most of its advertising in house, Waterstone’s uses agencies to work on its summer and Christmas campaigns. The AAR has already drawn up a list of about six agencies.

The high street bookseller spent &£4.7m on advertising in 2004 and uses PHD for its media buying.

A Waterstone’s spokeswoman says: “This is a trawl of agencies in order to refresh ourselves with what is out there. We are looking at various projects and agencies which we might want to work with.”

Marketing director Lesley Miles and head of marketing Julia Cove-Smith are thought to be overseeing the process.

The group’s latest trading statement for the five weeks to January 8 showed that like-for-like sales were up seven per cent.

In order to compete with online book retailers, Waterstone’s has partnered with Amazon to sell its books through a specially branded website.