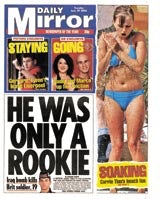 Media-savvy executives are well aware that comments appearing in print can come back and bite you on the behind. But that has not been the case for Ellis Watson, who in 1998, when he was marketing director of The Sun and News of the World, said: “I’m not general manager material.”

Yet a stint in that role at rival Mirror Group Newspapers (MGN) has not prevented the flamboyant and energetic Watson from climbing the corporate pole even higher to the role of managing director at Trinity Mirror’s national newspaper arm.

But, while praised as a talented marketer who is at home in the rough and tumble of the world of national newspapers, observers wonder if Watson will be able to halt the Daily Mirror’s circulation decline now that he is responsible for editorial as well as commercial departments.

His promotion comes hot on the heels of the appointment of a new Daily Mirror editor, Richard Wallace, in place of Piers Morgan, who was ousted following the debacle over the faked Iraq prisoner abuse photos. It also coincides with the publication last Thursday of the latest trading statement from Trinity Mirror, which tried to strike an upbeat note despite a steep fall in average net circulation for the Daily Mirror in May of 2.19 per cent month on month to 1,846,734. The company blames the scandal over the pictures for the drop.

But Watson’s task of reversing circulation decline is not limited to the Daily Mirror, with both the Sunday People and the Sunday Mirror requiring attention in this regard. He is also charged with managing Scottish titles the Daily Record and the Sunday Mail.

Trinity Mirror will announce interim results on July 29 for the six months to June 27 and Watson’s nationals division is expected to show growth in advertising revenues of 2.7 per cent, “reflecting a 2.6 increase in the UK national titles and three per cent increase for the Scottish national titles”. Forecasts for the regional division will see year-on-year advertising revenue growth of six per cent.

Circulation revenues are also expected to climb 6.8 per cent for the national newspapers for those six months. This is partly due to the 3p price hike introduced at the Daily Mirror in March. Now costing 35p, the newspaper is 5p dearer than rival The Sun, which remains 30p.

The price increase may have had a negative impact on the newspaper’s average net circulation for December 2003 to May 2004, which dropped 5.54 per cent year on year to 1,893,801. Former managing director Roger Eastoe, who runs consultancy RE &amp; Associates, says: ” The Daily Mirror has had the most disastrous period of its whole career.” He points out that the underlying circulation drop is even more drastic, as the price-cutting of early 2002 artificially inflated circulation figures.

The same price war with The Sun put paid to Watson’s predecessor, Mark Haysom, who was dumped soon after Sly Bailey’s arrival in February 2003. Haysom had taken over from the long- serving Eastoe, who was ousted not long after the acquisition of Mirror Group by regional group Trinity in 1999.

Whether Watson’s strong entrepreneurial streak will help save him from a similar fate is debatable. The 36-year-old was highly regarded at News International, where he was marketing director for The Sun and News of the World, but like many other marketers he leapt into the dot-com world in the mid-Nineties. He first moved to The Sun’s online property, CurrantBun.com, but then launched the Talkcast digital information venture together with former Times marketer Toby Constantine.

When Talkcast folded, he moved to Celador International – the distribution and licensing arm of Celador – and was one of Bailey’s first appointments at MGN when she moved from the National Magazine Company.

Watson’s larger-than-life personality and entrepreneurial qualities are laudable in a marketer, especially in the fast-moving world of tabloids, but he may now have to present a more sober side to the Trinity Mirror board, the City and shareholders. Furthermore, he has a marketing as opposed to advertising sales background. One senior newspaper executive who says that Watson is “the best marketer I know” does wonder whether he is the “right personality” to be managing director.

Constantine, now vice-president global marketing and research at Metro International, counters that Watson is “older and wiser and uses his theatrical side much more judiciously now. He has a very wide armoury and picks the right parts at the right time.”

Despite Watson’s apparent grasp of the media market, he still plunged into the precarious dot-com world without hesitation. Constantine says that while in hindsight mistakes were made, those with an entrepreneurial nature were not going to miss out on the dot-com boom and the experience has been invaluable. “We are very pleased we did not sit back and watch it pass by.”

Since Watson’s arrival at the Daily Mirror, M magazine has been axed and the more populist supplements 3am magazine and We Love Telly! have been launched. However, experts believe the biggest challenge for Watson is determining what the Daily Mirror now stands for.

Under Morgan it attempted to be a serious newspaper and former marketing director Alisdair Luxmoore launched a branding campaign in 2002 pushing that positioning. Although Watson has had his fair share of newspaper branding campaigns, having overseen the “Dedicated to the people of Britain” move at The Sun in 1998, former colleagues say his real expertise is in clever tactical promotions and the Mirror is unlikely to pursue brand marketing.

On the face of it, the newspaper does seem to have moved back to a celebrity-focused positioning, serving up an increased dose of Big Brother and celebrity gossip. There are also signals that it will look to its traditional Northern heartlands once more and cease being so London-centric, capitalising on the fact that The Sun is axing its Manchester office. MediaCom group press director Steve Goodman says: “Just to mimic The Sun is not the right way to go and to be true to their market is not a bad thing.”

Apart from positioning, media buyers say that the other area requiring attention is closer communication with advertising sales and senior management at the newspaper group. Some suggest that the national newspaper ad sales team could be more pro-active and that the nationals and regionals could work more closely together on ad packages. However, MGN is in the process of overhauling its sales operation and its website mirror.co.uk, presumably with the aim of boosting revenue and rectifying some of these issues.

But the clock is ticking for Watson who, says one industry insider, will have to do “something radical” to prevent the Daily Mirror’s circulation from slipping below 1.5 million mark and having a knock-on effect on ad revenues.