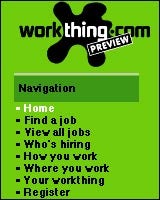 WCRS has won the creative account for Guardian Media Group’s (GMG) online recruitment site Workthing, which is reportedly being launched with a &£15m to &£20m media spend.

The agency is understood to have pitched against HHCL &amp; Partners and BMP OMD.

It will be responsible for developing brand positioning and a creative campaign to run across TV, radio, cinema, posters and online.

Media buying is being handled by Walker Media and media strategy is through Michaelides &amp; Bednash.

Workthing head of marketing Niall Murdoch says: “It was a tough decision as all the agencies put in a huge amount of work, but WCRS’ proposition had the edge.”

The site will offer a searchable database for jobs and will let users leave an anonymous CV in a database accessible by recruiters. It will also feature industry specific content and general recruitment and training related content.

The service is in a preview phase, called “It’s your thing”, designed to encourage feedback among trade users before a full-scale launch in the autumn. Workthing has established a strategic partnership with GMG’s Guardian Newspapers, which will provide content and information in the media, education and public sectors.