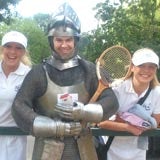 Britain – modern, thrusting, ready to take its place at the forefront of 21st-century progress – or not. Readers with a lot of time on their hands may remember Monsieur British, the handlebar-moustached “wizard prang” figure, who was meant to bring the French swarming across the Channel to stock up on cheap fish fingers and beer bellies (MW July 19, 2001).

Now, as you probably know, we’re all meant to be “waving the welly” to illustrate our great British sense of humour (our tourist industry is reduced to asking foreigners to come and laugh at us). Last week, to drive home the fact that we’re funny, the British Tourist Authority (BTA) sent an armoured, tennis-playing knight – you must have seen the ad – to Wimbledon to give away bookmarks to tourists. The Diary feels that this self-parody is a good move, and looks forward to seeing Ancient Britons in woad welcoming weary travellers to the Commonwealth Games.