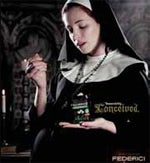 An attack on the Advertising Standards Authority by the National Secular Society (NSS) accusing the advertising watchdog of “reintroducing the blasphemy law”, generated a reader debate online. The NSS comment came after the ASA banned another advertisement for Antonio Federici ice cream for being offensive to Roman Catholics. The original story can be found here: (http://www. marketingweek.co.uk/asafreedom) and some comments below.

There seems to be an unjustified assumption by the Advertising Standards Authority that members of organised religions have higher standards of morality and ethics than the non-religious. There is no evidence for this or to justify these organisations being entitled to any special privileges or be immune from critical exposure.

The ASA seems to be imposing its own form of religious dictat on the electorate.
Keith

The funniest thing about this fiasco is that it suggests the church has a lower opinion of priests and nuns than the rest of us sinners.

The ads fairly obviously work on the assumption that most of us think priests and nuns are, generally, decent folk and far above “worldly temptations”, but that the ice cream is so delicious that even they are tempted.

By comparison, it seems to be the church that is worried that such paragons of virtue might have lower standards, and that the ads might draw attention to that. How bizarre!
Stuart Hartill