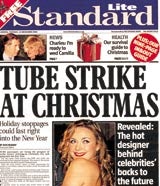 The opening gambit in a new battle for the hearts and minds of London’s newspaper readers is being played, with the launch of Standard Lite – an abbreviated version of the Evening Standard being given away free at lunchtime in the capital.

The publication’s arrival heralds the end of a phoney war that has lasted the best part of two years, since Express Newspapers first mooted the idea of a free afternoon paper for London.

The 48-page Standard Lite was launched yesterday (Tuesday) with a print-run of 50,000 and distribution within the area bounded by the Circle Line, between 11.30am and 2.30pm. Associated Newspapers maintains that Standard Lite is an edition of the Evening Standard – available between the first and second editions of the paid-for paper, before being withdrawn – that will boost the latter’s declining circulation.

Standard Lite will be available from Evening Standard street vendors and, initially, other vendors will hand out the title on the street. Eventually, there will be dump bins, probably on the street. Associated has not said whether it is seeking distribution partners, such as coffee shops or retailers.

Advertisements booked into the Evening Standard will automatically run free of charge in Standard Lite until the end of January. Details of trading arrangements after that date have yet to be revealed.

But some experts, such as Jon Puleston, director of media research company Media Intelligence, are cynical about the launch. He says: “It’s purely a defensive measure. There’s no way Associated is going to sustain this launch unless it has to. A free newspaper in the evening, from whichever quarter, could wipe out the Evening Standard.”

A former senior newspaper executive believes that Standard Lite will simply be “a way of sticking a plaster over a leaky circulation”. He adds: “It might take the edge off the decline, but ultimately it is smoke and mirrors.”

On the other hand, Tim Ewington, director of media strategist Human Capital, says: “It’s a sensible move. All the growth in newspaper revenue is coming from ads. They have to defend that.”

The reasons for the decline of the Evening Standard are varied. One buyer says that its heartland readership of office workers in the City is now used to getting up-to-the-minute free news from the internet. But there is also the question of cannibalisation by Metro.

Associated has steadfastly maintained that Metro has encouraged a new young group of people to read newspapers, rather than stealing readers from the Evening Standard. But some challenge this: Guardian Newspapers marketing director Marc Sands says that “there is no evidence to suggest that the development of Metro has led to a greater uptake of Associated’s own product or others’. However, it’s better to cannibalise yourself than let a competitor take a chunk of you.”

According to experts, Associated believes that Standard Lite could steal 25,000 readers off the paid-for newspaper; but the company expects the 50,000 print-run of the free paper to more than compensate. It believes 600,000 people take a short break for lunch within central London, and that there is scope to extend Standard Lite’s print-run to 100,000 within months.

However, there is confusion over whether the Standard Lite figures can actually be included in the Evening Standard’s official top-line circulation figures. An ABC spokesman says that a separate edition can be counted as an edition of an existing title if it has the same title, logo, masthead and date of issue. It must also have a physical resemblance to the parent edition and must contain 70 per cent or more of the display advertising of its parent edition. If the edition has less than 70 per cent, the publisher can include it in the top-line figure, but must also split out the edition’s circulation.

However, a further rule states “the edition has to be distributed and sold in the same way as the parent edition”. No one is prepared to say whether Standard Lite satisfies the criteria and Associated declined to comment on the issue for this article.

But numbers are not the only thing that matters to press buyers – they are interested in demographics, too. The readership of Standard Lite is expected to be skewed more towards women and people in their thirties – people who pop out at lunchtime for a sandwich.

This will muddy the waters for those press buyers who buy space in the Evening Standard to reach upmarket, older males.

One buyer says: “This means there will be two different products under the same masthead.” Given the wrangling over trading that has gone on regarding the changes in the sizes of The Independent and The Times, he also expects some bust-ups once the Evening Standard’s negotiating period comes round in the spring.

Another buyer says: “They are trying to sell it as another edition of the Standard, but I totally disagree. It’s a different product appealing to different people.”

There has been speculation that Standard Lite is just a test-bed for a plan to take the Evening Standard totally free. Evening Standard managing director Mike Anderson has plenty of experience running a free newspaper. He was managing director of Metro, selling the idea that the newspaper delivered a sophisticated young urban market for advertisers. There is a school of thought that these younger readers, brought up with Metro, are no longer prepared to pay for a newspaper.

But it is more likely that the launch of Standard Lite has been triggered by leaks about Express Newspapers’ plans for a free afternoon newspaper for the capital. So far, the Express group has decided to wait for a ruling from the Office of Fair Trading on whether Associated’s monopoly on distribution via the London Underground is anti-competitive, before proceeding with its plans.

Swedish company Metro International, which moved into the UK a few years ago and then retreated, may also be considering a launch in London. Editor-in-chief Per Mikael Jensen reportedly said last month that there is space for more free newspapers in London and that distribution is “no longer dependent on the Tube”.

The London paperscape could be about to change rapidly and advertisers might benefit from a competitive market. But the publishers themselves will need nerves of steel to face each other off in the bustling, time-pressured world of the London reader.