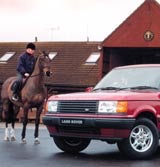 Financial planning and building for a secure long-term future is something of a struggle for most people, but the section of the population most likely to have the ability (in terms of both the necessary finance and knowledge) to take action is the upmarket ABs. Members of this demographic group are the most likely to enjoy high levels of education and the most lucrative employment.

According to BMRB’s Target Group Index (TGI) Premier survey, which focuses on the AB chief income-earners and their spouses, almost 70 per cent of this group – which comprises 9.6 million people – is aged between 20 and 54, and there is a slight bias towards men. One-third of them live in the London ITV region.

Marketers are most interested in those ABs who are in part-time or full-time employment. It is notable that this sub-group has grown in size from 5 million in 1992 to 6 million in 1997 and to 7.4 million in 2002 – a growth of almost 50 per cent in ten years.

The financial commitments of this elite group have shown some interesting trends over the past decade. The likelihood of having a mortgage has actually declined, from 82 per cent in 1992 to 78 per cent in 1997 and to 73 per cent now. This is counterbalanced by a rise in the likelihood of renting. Among those who do not have a mortgage, renting’s prevalence has risen from 21 per cent to 35 per cent over the same ten-year period.

In terms of numbers, this represents a rise in renters from 120,000 people in 1992 to almost 500,000 now. Unsurprisingly, almost two-thirds of these renters fall within the 20 to 34-year-old age range. A declining proportion, but nevertheless over 40 per cent of the total group, own their homes outright. Interestingly, the main shift in the profile of this group has been away from social grade A and towards grade B – this is the fastest-expanding demographic group in the general population movement into “the middle classes”.

The incidence of non-mortgage loans has also risen. Across the ten-year period, penetration of such loans within the expanding AB group has grown from 31 per cent to 38 per cent. Home improvements, new and used cars each account for between a quarter and a third of the loans.

Despite ongoing criticism of the National Health Service, there has been no significant growth in the take-up of private health insurance within this group. While there has been a rise of about 750,000 in the actual number insured, as a penetration of the group this has remained fairly static at around 40 per cent.

The desire of governments throughout the Eighties and Nineties to make the UK into a nation of shareholders also seems to have failed. Overall, there was an increase in share penetration from 46 per cent to 52 per cent between 1992 and 1997 and – including the ISAs within an overall definition of stock market involvement – penetration has now reached 59 per cent. But this is still well short of universality and, in an unattractive stock market climate, unlikely to increase dramatically in the near future.

The propensity to be involved in a pension scheme grew quite significantly in the first part of the last decade (from 74 per cent of the group in 1992 to 88 per cent in 1997), but showed no expansion in the second half – perhaps because of the flattening of the stock market and Government taxation policies, which acted as a discouragement.

The most emotional piece of financial forward planning – the making of a will – has also failed to show significant growth. Over 40 per cent of the target group claim not to have made a will – a figure that has remained fairly consistent over the past ten years. Similarly, the demographic profile of these non-will-makers has remained constant. As is the case with pensions, the young and the single are most guilty of remaining intestate – although in this instance males are slightly less likely to have made a will than are females.

Those young professionals who claim to have made a will show markedly different attitudes to planning than their less far-sighted counterparts. They consider themselves to be much better at saving money and far more certain that financial security after retirement is the individual’s personal responsibility. They have a higher regard for the need to be well-insured and are more involved in – and generally less wary of – the stock market.

Perhaps not surprisingly, the will-makers are more likely to involve others in their financial decision-making and are almost three times as likely as the rest to say that they usually consult a financial adviser. The same attitudinal variance appears to be reflected in the differences between those who have and have not made a will in the older age groups. This would indicate that it may be advisable to target marketing effort as much by attitude as by basic demographics.

Gillette is reviewing its $408m (£274.5m) global media planning and buying account for the first time in more than a decade. The review involves three agencies – the two incumbents OMD and Universal McCann, and non-roster agency MindShare. The company says it opened the review to WPP Group-owned MindShare, following its “long-standing relationship with its […]

The Advertising Standards Authority (ASA) has branded as irresponsible a press ad for the British Heart Foundation showing a woman with a plastic bag over her head, following a barrage of complaints. The advertisement, created by Abbott Mead Vickers.BBDO, in-cludes the tagline “I’ve got heart failure. And this is what it feels like every morning” […]

The article by Branwell Johnson on the UK hotel industry (MW May 16) and its efforts to reverse the decline in occupancy levels is totally wide of the mark in focussing on marketing. Sure, marketing has a part to play in the sense that it drives a proposition and is responsible for building brands. But […]