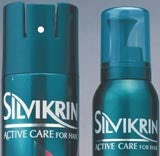 German haircare company Wella is to extend its Silvikrin hairspray range into the styling market for the first time in a bid to revive its image.

The new range will be launched in August and will comprise ten different styling products. The products are expected to be priced between £2.89 and £3.29, in line with Wella’s Shockwaves range.

According to one industry expert: “Silvikrin is perceived as a really archaic brand, and its extension into the hairstyling market will help reinvigorate it. But the proposition of the brand will remain the same and the new styling products will also target the mature market, particularly those older consumers who want to use products such as gels and mousses as well as hairsprays.”

Wella acquired the Silvikrin brand in 1993, from what was then SmithKline Beecham (SKB). At the same time, SKB sold its Vosene brand to the German company.

Pop Idol runner-up Gareth Gates signed a deal with Wella this year to endorse the Shockwaves range. The deal, which runs until December, will see Wella Shockwaves become the “official stylist of Gareth Gates” and the singer will endorse the range on packs as well as through point-of-purchase material, tailored merchandise and press advertising.