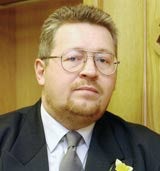 The Welsh Rugby Union (WRU) has appointed its first marketing chief in one of a number of appointments aimed at modernising the governing body and creating new revenue streams.

Gwyn Thomas takes up his post of general manager of commercial and marketing this week, reporting to group chief executive David Moffett.

Thomas joins from Tesco Wales Group, where he held a number of posts, including head of marketing for Wales, when he compiled the rural marketing strategy for Wales. Most recently he worked as a store manager for the retailer and was also the chairman of Tesco Wales Group. In 1999 he initiated and managed Tesco’s sponsorship of Welsh Rugby for the Rugby World Cup.

A spokesman for the WRU adds that as a result of Thomas’s appointment, two less senior marketing posts have been scrapped.

At the WRU, Thomas will negotiate sponsorship deals, develop licensing, merchandising and hospitality for the WRU and the Millennium Stadium. His appointment comes after WRU members voted to modernise the organisation.

Last year the WRU agreed a deal with Lloyds TSB to sponsor the Welsh National League divisions one to seven, and also secured Specsavers in a referees sponsorship deal (MW August 29, 2002).