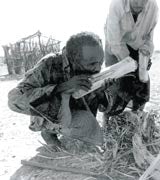 Leaders of the G8 nations last week agreed to let more crumbs fall from their groaning table and into the gaping pockets of lowand middle-income countries desperate to boost development.

They have pledged an extra $1bn (&£653m) debt relief, some &£6bn of aid for Africa and they say they will “look” at the way import tariffs discriminate against products from countries of the South.

But while the leaders of the world’s richest nations were meeting in their luxurious Canadian hideaway in the Rocky Mountains, marketers across the developing world were examining ways of building brands that could leap across continents and gain access to restrictive western markets.

Development experts believe that for southern countries to extract greater value from their raw materials, their produce and the creativity of their populations, they need to add value to their products at source rather than hand over the task – and profit margins – to western corporations.

There are precious few major brands from developing countries on sale in the UK or any other northern nation, though there are some notable exceptions in food and drink.

Energy drink Red Bull, the fastest-growing non-alcoholic beverage in Europe, originates from Thailand. The company is majority-owned by the Yoovidhya family and was orignally sold in Thailand under the name Krating Dang. The booming energy drinks market is based on products developed in the Far East.

The UK’s fastest-growing wine brand, Kumala, is a product of South Africa. Figures published last week by AC Nielsen show the brand, marketed by Western Wines, increased 179 per cent by value in 2001, and is now worth more than &£33m. Kumala brand manager Paul Sullivan says there is growing interest in South African produce, with the Cape fruit logo representing quality, and a growing realisation among South Africa’s farmers that they should aim for quality rather than volume. “We work with growers and co-operatives to make the right quality of wine. The big change has been moving the mindset away from quantity to quality. We have encouraged people who are serious about growing grapes for wine. People are focusing on quality.”

India, another “middle income” country like South Africa, has no significant own-brands on sale in the UK, though this could change according to Raj Halve, vice-president of the international brand division of Indian distiller Shaw Wallace. The company has forged a bottling and distribution agreement with Scottish drinks company Kyndal (MW last week), which could result in its products being marketed across Europe and the Middle East.

Shaw Wallace already has a whisky brand on sale in the US, and has test marketed two beers – Laltoofan and Kohinoor – in the UK. Halve says: “Shaw Wallace is a completely vertically and horizontally integrated company, with brandy, whisky and vodka in India. Similarly Kyndal in Scotland plans to manufacture all these things through their plants.” He predicts Shaw Wallace products could be successful in Europe in years to come.

But for low-income countries the export outlook is bleak, and the failure of G8 to address the North’s tariff structures means there is little hope for brands from the poorest nations. According to Duncan Green, policy adviser for development agency Cafod, a recent United Nations’ report on trade and development showed that exports from developing countries were suffering more than ever. “Countries we thought are doing well are slipping behind because northern countries are good at keeping the added-value aspects of the produce in the North. If we can get developing countries to take more of that in house and develop their own brands, they can get more bang for their export buck,” he says.

Tariff structures mean that while southern countries can export raw materials and produce to the North without attracting too much tax. Yet, the moment their products are processed, the tariffs become prohibitive. Two areas Green believes that poorer countries need to concentrate on are intellectual property and design, though he concedes that the global policing of trademarks is an expensive business.

Coffee is an area where development experts see room for southern producers to build their own brand values and reap substantial benefits. According to Raphael Kaplinsky of the Institute of Development Studies at Sussex University, there are opportunities to market coffee through supermarkets in the same way as wine. He argues that coffee cultivators need to build the images of their regions in the same way as new world wine producers. One example is Blue Mountain Jamaican Coffee, which has circumvented some of the shifts in demand for coffee in recent years by building a brand name based around its zone of origin.

The West African nation of Ghana is about to embark on a project to build a national image in the hope that this will serve as an umbrella brand for products from that country.

Creenagh Lodge of branding agency Corporate Edge, which is involved in the project, says: “There are three great revenue streams for small countries – inward investment, tourism and exports. Export is the best way of having control over revenues, because you are not hostage to what happens in other economies.” She says by building Ghana’s brand reputation, there can be a halo effect on products from that country, and this can enhance its tourism.

Another scheme being developed is the “Out of Africa” brand. Founder Justin Braithwaite is building up an investment fund of $100m (&£65.3m) to invest in African agricultural businesses, which will then be able to sell their products in the UK and Europe under the “Out of Africa” brand name. The brand will denote ethically produced products selling at competitive prices to rivals. Braithwaite will seek listings in European supermarkets once the scheme gets off the ground, which should be within the next two years.

He says: “This time around we will start in the market and make sure Africa produces what the market wants, rather than invest in over-supplied categories.”

There is no shortage of opportunity for developing countries to turn their raw materials and produce into brands at source. But countries of the North are scared of opening their markets to developing countries’ brands, as this could compromise the ability of western businesses to lead the rush to globalisation. Just last week tinned pear producers in the US forced the re-imposition of a 15 per cent tariff on imports of tinned pears from South Africa, which had been eliminated by the Africa Growth and Opportunity Act in 2000. The South African government warned that this move demonstrated how easily favourable legislation could be reversed.

Brands from lowand middleincome countries are likely to experience continuing resistance from more wealthy nations in any bid to fill supermarket shelves.