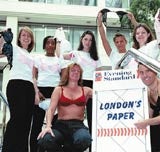 The Evening Standard may present a sober, suit-wearing image for public consumption, but the newspaper obviously harbours a number of subversive cross-dressers, judging by this pic. of group head of agency sales Michael Craig (he’s the one on the right…).

And look at his female colleagues in the ad sales team. Are they waving their lingerie in “support” of Michael’s coming out, or have they taken “dress-down Friday” a bit too far? Although the Diary notes that Michael’s enthusiasm for prancing around in lingerie isn’t shared by the whole team.

Actually, all the bosom business was in aid of charity, as the team geared up for the Breakthrough for Breast Cancer Moon Walk last Saturday. The Diary is willing to bet Michael still gets annoyed when the guys twang his straps though.