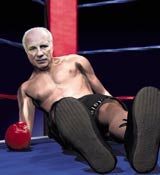 There would be more than a little irony in Greg Dyke, the former director-general of the now battered and bruised BBC, ending up as chairman of rival ITV in the aftermath of the Hutton Report.

For the past few years, ITV has been the broadcaster lurching from one crisis to another: it has had to deal with the loss-making ITV Digital, falling advertising revenues and an aggressive BBC scheduling against it.

Now it is the BBC that is in turmoil – the corporation is facing the biggest crisis of its 82-year history. Lord Hutton, appointed to investigate events leading up to the death of Dr David Kelly, came down strongly against the BBC and its editorial standards.

Resignations followed quickly: chairman of the board of governors Gavyn Davies; Dyke, after the governors failed to back him; and finally the journalist whose report was at the centre of the inquiry, Andrew Gilligan. A grovelling apology to the Government, made by acting chairman Lord Ryder, further knocked morale at the public broadcaster.

The crisis could not have come at a worse time for the BBC, whose charter is currently being reviewed by the Department of Culture, Media and Sport. The present charter is due to expire at the end of 2006.

Quickly across the floor

If speculation in the industry is to be believed, then ITV’s shareholders want to capitalise on Dyke’s departure from the BBC. They need a chairman to head the newly merged Carlton and Granada, which began trading as ITV plc on Monday. Reports suggest that Anthony Bolton, the UK head of investment fund Fidelity, a major shareholder in ITV, is planning to approach Dyke for the role. Bolton is the man who blocked Michael Green’s appointment as chairman. The rumours coincide with the news that another man widely tipped for the post, former investment banker John Nelson, has withdrawn his candidature. Those close to Dyke say the role of chairman would allow the multi-millionaire to pursue other business interests and that the other possible opening at ITV, as chief executive – should Charles Allen be squeezed out – would effectively be a step down for a former BBC director-general.

Media Planning Group client services director Andrew Canter says: “It would be fantastic if Greg Dyke were to land at ITV. Having spent all that time at the BBC, he knows what areas to attack and what the corporation’s next moves will be.”

Dyke may well know what the BBC’s plans are for the immediate future, but ITV and other broadcasters stand to gain if Dyke’s successor decides to change the BBC’s strategy.

During Dyke’s reign, which began in January 2000, the BBC turned into an extremely competitive and commercial animal, overtly using scheduling as a weapon in BBC1’s ratings war against ITV1.

Zenith Optimedia TV director Chris Hayward says: “The BBC under Dyke became very focused and commercial in the way it operated. It set itself targets, one of which was clearly ITV, its share of viewing and its share of peak.”

While advertisers were concerned that ITV1 was losing audiences, they also felt that the commercial broadcaster needed to raise its game to compete – just as they would in their own sectors if they came under attack.

Whether the BBC will continue to schedule aggressively is open to debate. Billetts Media Consulting chief executive Andy Pearch says: “It depends on the character of Dyke’s successor and whether he or she will change strategy given the results of the Hutton Inquiry and with the charter renewal coming up.”

Keep off our turf

Under Dyke, the BBC also launched new digital channels into sectors that were arguably adequately served by the commercial sector. Channel 4 and other broadcasters fought hard against the launch of BBC3 into the 16- to 34-year-old market. Nickelodeon and the History Channel also felt the harsh wind of publicly funded competition, with the launch of the BBC’s children’s digital channels, – CBeebies and CBBC – and UKTV History, through the BBC’s joint venture UKTV.

It remains to be seen whether, or how, the BBC’s approach will change now that Dyke has gone. It will in part depend on who takes over and their approach to the charter review, which looks at how the BBC should be funded and regulated, whether it delivers value for money and how it should be positioned in relation to the market.

With much at stake, Accenture media partner Theresa Wise believes that the BBC’s “natural response would be to focus on its public-service remit”. Candidates for director-general include acting director-general Mark Byford and Channel 4 chief executive Mark Thompson. Both, say BBC insiders, may consider that chasing ratings is not everything.

MindShare investment director Nick Theakstone says: “It is Christmas come early for ITV – whoever comes in is likely to err on the side of caution.”

Before deciding on Dyke’s replacement, however, the BBC’s board of governors will have a new chairman – advertisements are due to be placed in Sunday’s newspapers. Although a cross-party panel will oversee the appointment, the Government is reportedly keen to demonstrate its intention to keep the BBC independent by appointing either someone with no political affiliations or a Tory grandee such as Chris Patten. Other possible candidates include Lord Burns – who is already advising culture secretary Tessa Jowell on the charter review – former Vodafone chief executive Sir Christopher Gent, former Channel 4 chief executive Michael Grade and former Independent Television Commission chief executive Patricia Hodgson.

Given that Hutton was damning of the BBC, many believe the corporation will end up being regulated by Ofcom, rather than the board of governors – a state of affairs that other broadcasters have long called for.

Mick Desmond, chief executive of ITV Broadcasting, says: “What we have wanted pre- and post-Hutton is for the BBC to be regulated by Ofcom.”

He suggests that the corporation should be run like Channel 4, with a group of non-executive directors and a non-executive chairman who sits on the management committee and is answerable to Ofcom on regulatory issues.

“Then at least we would have one objective regulator looking at all our respective roles and what the role of public-sector broadcasting is for each network,” he adds.

In particular, many broadcasters would like to see the BBC having to seek Ofcom’s approval before launching new services – particularly where similar services are already provided by the commercial sector.

But Starcom MediaVest executive buying director Matt Blackborn warns that Ofcom regulation could be a “double-edged sword” as the regulator could alter the distribution of the BBC’s revenue between digital and analogue stations. Currently, he says, “it is in the interest of commercial stations for the BBC to invest heavily in its digital offering at the expense of core stations, but this is only the case while the digital stations don’t deliver strong audiences.”

However, it must be remembered that the Government is intent on switching off the analogue TV signal, and it probably sees the BBC’s investment in digital TV channels and Freeview as helping to achieve that goal.

As BBC director of marketing, communications and audiences Andy Duncan says: “The BBC has quite rightly moved into the digital age. It’s a portfolio world and you need more than two channels.”

Duncan defends BBC4, which has come in for criticism over its low audiences, as providing quality and diversity, and the popular children’s channels for providing a service to parents who want their children to watch TV in an ad-free environment.

Everyone’s looking at the BBC

The charter review will also take into account the findings of Ofcom’s current review of public-service TV broadcasting; Philip Graf’s review of the BBC’s online services and reviews of the BBC’s digital TV and radio services, due this year.

Another issue is the funding of the BBC, which has an income of about &£2.7bn from the licence fee, and makes five per cent of its total income from its commercial arm. Jowell admits that with more than 50 per cent of UK homes having access to digital TV, the BBC’s funding needs to be looked at “very carefully”.

The Daily Express has already mounted a campaign to scrap the &£116 licence fee and the Conservative Party has commissioned a study group, led by former Five chief executive David Elstein, to look at other funding options including subscriptions.

Another alternative – albeit an unlikely one owing to probable public opposition – would be for the BBC to take advertising. Such a move would give advertisers more choice and inevitably lead to a fall in prices.

Hayward says: “Clients want more competition and I understand that. If there were to be some commercial input there would have to be a balance between the public-service remit and client requirements.”

Canter believes that the public may tolerate programme sponsorship or public-service advertising from COI Communications.

Whatever changes lie ahead for the BBC, one fact is sure. The BBC still enjoys an enviable reputation, which does not appear to have been dented by the Hutton Report. Many opinion polls show public trust in the organisation to be higher than that in the Government.

Blackborn says: “It has very quickly become apparent that people don’t view the inquiry result as a reason to switch off or to stop listening to the BBC, even though there has been heavy criticism of the corporation’s journalism.”

Duncan, who has yet to carry out research on how the events of the past week have affected the BBC, says: “If we can take the lessons and the criticisms in the report on board and act on them, I think the BBC will come out stronger.”

Despite Dyke’s decision not to take legal action over Hutton, it looks as though it will be some time before the BBC can draw a line under the events of the past year and concentrate on the future.