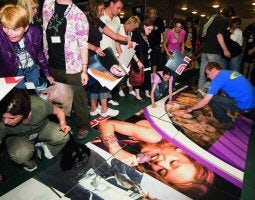 Conferences and exhibitions are good at helping build a sense of community because once customers or staff are out of the usual office environment and able to meet face to face, they are often more open to new ideas.

The use of expert or celebrity speakers is traditionally considered one of the best ways to underline key messages. But MJM senior vice-president of marketing and strategy Steven Phillips feels it is not enough just to use someone well known – they have to have something relevant to say to win over hearts and minds.

He cites the presentation given by Beatles producer George Martin for IBM. Martin spoke about Sergeant Pepper’s Lonely Hearts’ Club Band, an album he produced when the Beatles were at the height of their success. In the late 1960s, it was daringly different from the band’s previous albums. In fact, it was different from any album that had gone before.

Resonant stories”George Martin said ‘what do you do once you have reached the pinnacle? If you bet on a sure thing, you are never going to be a winner’,” recalls Phillips.

“He explained that you have to take some risks, just as he had with that album.

“Two years on, people still remember that speech. The premise of any event is to change something, to put new knowledge into the environment or get customers or staff to take a new action. To achieve this, your brand or principles need to become part of your audience’s world.”

Using the Sergeant Pepper story was a universal touchstone, and IBM’s corporate strategy was placed into a context with which people could identify. This brought the message home.

“It was the new chief executive’s first big event, with over 4,000 suppliers and customers in attendance,” says Leslie. “There was rebranding to reflect a new identity – it was a lot for people to take in. For many, it was Sir Clive who reinforced the message and brought the conference to life.”

Whitbread then followed up the conference with an intranet campaign, but Leslie points out that communication is equally important in the run-up to an event.

Trades Exhibitions managing director Mark Moloney goes further. As organiser of the salon and spa trade show Professional Beauty, he believes post-event communication matters less than what goes before. His aim is to drive attendance on behalf of exhibitors.

“We begin active visitor promotion four months ahead. Whether your interest is meeting people, education or doing a deal, we strive to push the appropriate buttons. The key is to make it so exciting that people will do their utmost to get there.”

Once there, it’s the quality of sales that is most important in terms of a trade show. “The post-event hullabaloo is an optional extra – customers discount it, unless it’s to place an order. I believe most UK trade show organisers don’t spend enough on promotion. If numbers are falling, this is incumbent on them. We are committed to spending at least 10% of our budget on promotion – often 20%. It’s pre-event excitement that gets people through the door.”

Not all events are about selling. Strategic business forums, such as those run on cruise ships, offer the chance for around 400 delegates and 100 suppliers to meet on-board.

MIXING WITH THE MOVERSLeslie says: “Events like this are on the rise because they offer the chance to meet major decision-makers one-on-one at a prearranged time. A great deal of work goes into the run-up, so delegates can meet those they really want to.

“Before you board, you have your itinerary. These meetings are not necessarily about the big pitch. The real sales negotiations take place afterwards. But forums open doors and provide a great return on investment.”

So what about internal events, where increased sales – although a long-term aim – are of less •immediate importance? “A growing trend in the corporate world is for blue-chip companies to use major staff events for reward or recognition,” says sales and marketing director Ian Irving of brand experience agency Sledge.

“They build community spirit to help retain staff. Losing high-quality people is a double whammy in sectors where a few big operators dominate because your people could fetch up at a competitor and their skills and value turned against you.”

Sledge created Microsoft’s 2006 summer staff party with a festival theme of El Noche Libre (A Night of Freedom). Irving explains how El Noche Libre got staff talking early on, with Flash animation e-mail invites capturing the mood of contemporary Latin culture. On arrival, the theme was evident in the peripheral entertainment and refreshments, the extensive and varied food, themed bars and the headline act, Groove Armada.

“The event was not about a proliferation of company logos or branded items. Instead, everything was geared towards making staff feel special. It was the little things, like the provision of a taxi rank and co-ordinated late-night transport, which was appreciated and got people talking. After the party, an internal blog enabled visitors to upload pictures, download desktops and print images.

Lifestyle match”Overall, it was an extravaganza that staff appreciated, irrespective of the fact that it was corporate,” says Sledge. “It sat comfortably with their lifestyles and aspirations, rather than seeming to be some kind of obligatory distraction.” In short, buy-in to a party has to be earned.

NKD Group designs and co-ordinates events to produce audience engagement and enthusiasm. Creative director Matt Ralph says: “What often happens is staff remember two or three messages and that’s the end of it. But an event isn’t a standalone. The aim is to create an external message and make it internal. So give your event a distinctive brand personality. You don’t need to incorporate expensive celebrities or special effects to be engaging. Instead, surprise and delight the audience from the minute they arrive – treat them as customers. Challenge the conventional way of doing things. So many conferences run to the same format – sometimes all it takes is a little creativity to inspire people. Using visual, audio, environment, taste or even smell to deliver the message can be an effective way to engage. People remember experiences far more than they remember speeches.”

He illustrates his point with the team-building roadshow for 2,200 NPower customer operations employees, which was staged in groups of around 150. The task was to engage each individual in customer operations with the overall company vision so that they felt valued for their role in the organisation and understood the power of working as a cohesive team. The strapline was “Being players, creating fans”.

“This reflected the thinking that you want customers to be fans of you and of NPower. The invitation looked like a ticket to a gig or sporting event, featuring iconic sport and pop stars, who would appeal to our target market. This built anticipation and interest.”

Ralph believes it’s important to get the right balance between intellectual and experiential input. “Attacking the five senses helped to get our message across. We had the noise of a crowd to create the sense of being both a fan and a player. The stage was the reverse of a massive crowd scene, with the audience looking out, to make participants ask ‘how does Robbie Williams feel?’. We also explored what people do to earn fans.

“These days, we all get a lot of stimulation. You can’t fob people off with a poorly produced corporate video when they see things that are more exciting in a 30-second ad. They don’t want to be patronised.

“If energy and involvement are high, an event will be compelling, which helps to get your message across. A key element was a giant floor jigsaw. This activity demonstrated a lot: that you can’t do things alone; that you need to work as both small and large teams; that you need to co-operate with people you have not met before; and that focus is crucial.”

What about follow-up? Ralph recommends using your conference brand to badge communications. “A reminder of the event should come within a month and provide some value to the recipient. And any progress updates should be personalised and sent directly to the recipient, rather than expecting them to find it in a staff magazine or on the company intranet.”

BLOG YOUR BRANDIncreasingly, the internet is being used to maintain enthusiasm. Liberate Media director Wendy McAuliffe suggests using a blog as a way for brands to create interest around the subjects raised. “Daily blogging following the event can help to prolong discussion by inviting open comment.”

McAuliffe also recommends an e-mail round-up of the event’s discussion points to maintain contact with attendees and stimulate further conversation. “This should be done on both a group and an individual level to pick up specific conversation streams,” she says. •

The BBC is facing political pressure to abort plans for advertising on its new international website, which is due to launch next year. A group of MPs, backed by the National Union of Journalists (NUJ), is planning to table an Early Day Motion i…

Sales promotions aim to boost volumes an build brand loyalty, but to really pay off they must be well presented and backed by imaginative supporting work to encourage customers.