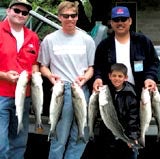 The Diary hears that PR agency Red Rooster has been appointed to handle the UK and European launch of a “revolutionary” new product called Ultrabite.

However, for the benefit of our undead readership, this is not a product developed for the pan-European vampire population.

In fact, as Red Rooster explains, Ultrabite is actually a new “fish attractant”. The product may not sound very exciting, but as a spokeswoman for the company says: “It works differently from all other fish attractants, which are invariably flavoured foods.

“It utilises fish sex hormones to attract fish to the area and turns on their receptors to feed.”

A PR campaign starts in earnest later this month. We wait with “baited” breath.