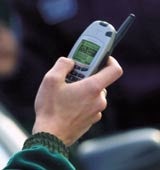 The advent of third-generation (3G) mobile phones has been hailed by many in the telecoms industry as the best thing since the proverbial loaf of bread was first sliced. 3G phones can be used to download music, show film trailers and football highlights and direct you to your nearest cashpoint, as well as make simple phone calls.

These are all functions directed at consumers, but what can the technology offer advertisers? Theoretically, advertisers could target 3G users with streamed video advertisements, but so far in the UK little has been done to make this a reality.

But that could all change in the next few weeks. Mobile technology company MX Telecom has found a way for advertisers to use the 3G platform. Video ads can be streamed to phones when users enter a special five-digit short-code number, that can be featured by advertisers in their existing print, poster or TV advertising, and then press the “video call” button on their handsets.

Third-generation network 3 will be able to offer the service within weeks, although it is expected that it will initially only be used for content-based services such as news and weather rather than pure advertising. Advertisers will no doubt look at teaming up with content providers to sponsor their output.

But MX Telecom managing director Mark Fitzgerald claims a number of brand owners are looking at the service’s potential for delivering their own advertising to consumers..

3G was introduced to the UK in March 2003 when Asian conglomerate Hutchison Whampoa – the company that founded Orange – launched its next generation mobile service, 3. Despite a rocky start, the operator is thought to have almost 2 million customers.

It was joined last month by Vodafone, which now offers customers 3G services. Rivals Orange, T-Mobile and O2, as well as “virtual operators” Virgin Mobile and BT, are expected to introduce services in the next few months. MX Telecom’s Fitzgerald believes it is then “only a matter of time” before all the networks use the short-code system.

BT already has the capability to stream news bulletins through the BT Tower to mobile phones within 15 seconds of them appearing on television, claims James Osborne, from BT Global Broadcast Services. “And the same principle applies to ads,” he says. “It will happen very soon.”

Osborne says that it is not the technology that is holding up the process, but the need to establish a workable revenue stream for network operators and an affordable service for advertisers.

In time advertisers will no doubt work out how they can make effective use of video streaming ads, just as they have taken advantage of SMS text messaging and MMS picture messaging. The mobile market is one that they can’t afford to miss. A study by communications regulator Ofcom earlier this year revealed that consumers now spend more on mobile phones than on land lines, with mobile users spending &£10.7bn in 2003, an increase of 16.3 per cent on the previous year.

Users of 3G account for about three per cent of the UK mobile market, but mobile marketing specialist Enpocket chief executive Peter Larsen believes there are enough to interest brand owners. “Marketers begin to get interested when there’s an addressable segment of about a million,” he says.

Larsen thinks advertisements from some of the more innovative brands will soon begin to make their way around users through viral marketing campaigns.

One industry expert predicts 3G will become a mass-market channel for advertisers within 18 months, but Capgemini Telecom, Media &amp; Entertainment managing consultant Federico Bolza believes this is over-optimistic. Mobile phones, he says, are still seen primarily as communications devices and it will take another three years before they are accepted as interactive media players as well.

“The key is not to get it wrong now,” he says. “We think we can translate existing experiences to other environments but it doesn’t always work. WAP is a good example. People wanted the same experience they got from the internet and they didn’t get it.”

Video streaming has already taken off in Japan, which is well ahead of Europe in terms of 3G adoption, with 24 per cent of mobile owners using the full range of 3G services on a daily basis, according to the Wireless World Forum.

But Bolza warns against comparing the UK market with Japan. “The cultural gulf between our usage and theirs is so vast that things almost never pan out the same way here.”

There are also still many issues to be resolved, such as screen resolution, sound and battery life, claims Theo Izzard-Brown, account planner at digital agency Agency Republic. But he is positive about the medium, adding: “It’s a much more targeted, bespoke and accountable way to advertise.”