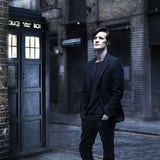 The TV industry is a world awash with acronyms and funny-looking short words – VOD, TiVo, SmartTV, Sky+, VOSDAL – that all point towards the fact that TV viewing is no longer just linear, it’s time shifted.

A fair amount of time-travelling took place last month, when a record number of Dr Who fans chose to record Easter Sunday’s episode and watch it later rather than live.

On what was an incredibly balmy day, 8.86 million viewers stayed in the shade and watched the Dr travel back in time to witness the 1969 moon landing.

But an incredible 4.11 million people opted to make the Dr travel through time in more ways than one and watch the programme later.

Dalia Gereis, commercial director of Kantar Media Audiences, the research company that compiled analysis from BARB data, says the figures show that a programme’s performance should not be judged on overnight figures alone.

The Beeb dominates the time-shifted viewing records. Apparently UK time-shifters would rather watch Phil sinking pints in the Vic than Norris stirring gossip at the Rover’s Return.

People in the UK watch an average of 4 hours of linear TV each day, according to BARB, but due to the rise in internet connected TVs and online catch up services, the amount of people watching TV leave appears to be dropping.

With this in mind, it seems sensible for for the industry-trusted measurement companies provide rigorous analysis of time-shifted figures in their reports for a more representative overview of UK TV viewing.

ABC has realised it with online and mobile journalism and Nielsen has started reporting on online video, it is abouttime for TV measurement services to catch up.