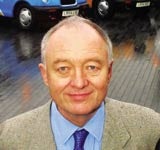 Fostering good supplier-client relationships is an integral part of sound business practice. But when the supplier is Associated Newspapers, publisher of Metro and The Evening Standard, and the client is London Mayor Ken Livingstone through his control of Metro’s distribution network, the London Underground, the relationship has been almost guaranteed to be unhappy from the start.

And it is unlikely to have been made any easier with the latest editorial outburst in the Evening Standard against Livingstone and his management of Transport for London (TfL). This may well have provoked the forceful statement issued by Livingstone last week that said: “TfL… will be taking appropriate action to bring about the distribution of a free afternoon newspaper on the Tube.”

Maybe Livingstone finally snapped at Evening Standard headlines such as “Mayor faces calls for probe into Oyster card glitches” and “Can commuters believe a word the Mayor says?” – both of which appeared in the 48 hours preceding his announcement, which opens up the prospect of competition to Associated’s dominance of the London market.

But it is more likely that the mayor has wind of the Office of Fair Trading’s ruling over whether Associated’s exclusive distribution contract with TfL, which is used for Metro, is anti-competitive. Livingstone said in the same statement that he will resolve “the long-running OFT investigation negotiating appropriate changes to the agreement with Associated and preparing an advertisement inviting bids from newspaper organisations”.

The OFT says that it has noted the mayor’s comments and that its “investigation is continuing”.

Observers say that Livingstone will not tear up the TfL contract and turf Metro out of underground stations. The contract runs until 2010 and the publication is popular – it even carries a regular page of news supplied by TfL. If Livingstone’s move does not accord with the terms of the awaited OFT decision, he could lay himself open to legal action for breach of contract.

However, it is Livingstone’s bÃªte noire, the Evening Standard, that he seems to have in his sights. He wants to see a free afternoon newspaper and any such publication would threaten the Standard’s paid-for evening sales.

Observers claim that Livingstone, in his client role, is banging the table and saying to Associated he wants to renegotiate the contract. It could be in Associated’s interests to do so, even if it means the publisher voluntarily giving up its 24-hour grip on underground distribution. Such an approach could generate goodwill with the mayor. However, word from the Associated camp suggests there will be no plea bargaining ahead of the OFT ruling.

The London newspaper landscape could change dramatically if an afternoon distribution slot goes up for tender. Associated has already launched a free lunchtime edition of the Evening Standard, claiming it’s a strategy to bolster the Evening Standard’s overall circulation and that it offers a sampling opportunity.

Some see Standard Lite as a defensive measure against afternoon interlopers, while others, such as Guardian Newspapers managing director Carolyn McCall, see it as an inevitable first step in making the Evening Standard completely free – a move hotly denied by Associated. At a recent OMD Predictions presentation, McCall said: “We think it is a transitional strategy and it will probably be a free sheet within the next year to 18 months.”

There is no doubt that the free edition has had some impact on paid-for sales – the average net circulation figure for December, a month which also experiences some seasonal fall, shows a drop of 6.29 per cent on November, down to 347,523, according to Audit Bureau of Circulations (ABC) figures. The period-on-period drop is even more dramatic – down 9.44 per cent.

While Express Newspapers, which triggered the OFT investigation by filing a complaint against Associated’s contract with TfL, appears to be favourite to win the afternoon distribution contract, a tender process would be open to all. Richard Desmond has shown restraint in response to Livingstone’s announcement, saying: “We welcome the mayor’s statement and look forward to the matter being resolved quickly.”

Other newspaper publishers scenting an opportunity may include News International and the Telegraph Group – the latter has former Associated executive Murdoch MacLennan at the helm and he may want to use the knowledge he gleaned overseeing the preparation of Standard Lite in mounting a tender bid. Regional groups such as Archant may also wish to weigh in and Metro International, the Swedish-owned pioneer of free newspapers that was forced to retreat from the UK after a short-lived attempt to crack the market, has long-coveted some kind of presence here.

But one expert points out that the possibility of an afternoon slot on the underground is not a given. Metro is put in place in the early morning when the underground is empty and is off platform by 9.30am. Whether health and safety officials will look kindly on a widespread distribution operation rushing around underground corridors and platforms in the afternoon is another matter.

There is also the question of editorial deadlines and quality of content. Metro is created overnight with relatively fresh news; an afternoon publisher will only have the morning in which to gather stories. On the other hand, an afternoon paper is more useful in terms of entertainment suggestions and listings for people pouring out of work.

On the commercial side, the coveted afternoon slot may not actually be a golden egg. Free afternoon newspapers in Europe have not taken off – Metro International launched an afternoon paper in Stockholm called Everyday in 2000, but axed it within eight months, stating at the time “advertisers remain to be convinced and we prefer to focus our efforts on the Metro free morning newspaper business”.

Experts believe London could support more publications, albeit in the morning. Vizeum head of press Alex Randall says: “If you look at the success of Metro, potentially there is enough advertising around”. Another press buyer says: “The market needs fresh blood. Metro has not developed because it’s had no competition.”

The play for London should not be seen in isolation, but rather as part of a wider shift in newspaper business models being examined by numerous publishing groups. They have begun to look at other revenue streams and ways of disseminating content as paid-for circulations continue to fall.

In the UK, although Associated has already taken steps to introduce a “Lite” edition of the Evening Standard, it maintains the newspaper will remain a “hybrid’ and will not go completely free. But its thinking may also be followed by the Guardian Media Group’s Manchester Evening News, which is also evaluating a Lite edition to replace its 4.30pm final edition or to go out alongside it.

The signs are that this could be a watershed year for the traditional newspaper model, so expect to see more publishers experimenting with different media channels and revenue streams.