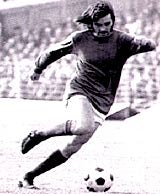 The announcement that the Football Fans’ Union is asking people to boycott ITV’s World Cup coverage from Japan and South Korea was greeted with mock-terror by ITV executives this week.

“Oh we’re really, really scared,” said one ITV source, in an exaggerated and ever-so-slightly sarcastic tone of voice. He then pretended to bite his nails while knocking his knees together and sweating.

“My God, thanks to the influence of these people, our coverage of England’s first match against Sweden this Sunday could produce the lowest viewing figures ever,” he added, before giggling uncontrollably and whispering to his friends in the corner.

The fans’ boycott began in April, in protest against Carlton and Granada’s role in the ITV Digital fiasco and the possible effect on Football League clubs. A spokesman for Carlton says: “The Football Fans’ Union? Is that a social club or something?”