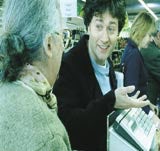 It is not often that brands fight to enter a declining market that is already over-supplied. But AOL, which claims to be the world’s biggest internet service provider, is hoping that its UK launch of a fixed-line telephone service this week will help it in the scramble to become a “triple-play” company offering broadband, television and telephone services on a single bill.

Fixed-line telephone calls are a shrinking market – in the third quarter of 2004, their value fell by seven per cent annually, to &£2.6bn, as a result of price deflation and the shift to mobile calls. BT dominates the market, though its share of call minutes fell by seven per cent last year to 63 per cent (Ofcom) as more companies entered the market for “carrier pre-selection”(CPS), under which customers pay line-rental charges to BT but make calls through other providers.

With the launch of AOL Talk, the ISP joins some 150 companies fighting for a share of fixed-line phone calls. AOL Talk offers existing AOL internet customers who have BT lines all their national and local calls at an introductory price of &£7.99 a month, though this will rise to &£9.99 from July. Later in the year, the service will be offered to the public at large, but it is not clear whether AOL will continue to offer deals bundling internet services with a fixed-line telephone offer. “Bundles have a strong message for consumers, but it is too soon to say. Bundles are definitely a possibility,” says an AOL spokesman.

“AOL is trying to retain broadband customers who might be interested in migrating to a CPS service such as Talk Talk. Everyone likes to earn extra money from existing customers – the worrying thing is when someone offers two services for a cheap rate and you lose customers.”

Carrier pre-selection is one way into the fixed-line market, but the big prize is gaining overall control of a household’s communications bill. The Post Office has launched a service called HomePhone, using wholesale line rental from BT, so it will bill customers directly for line rental as well as calls. It aims to have 1 million customers by 2008. Carphone Warehouse also offers CPS customers a line-rental option. AOL UK chairman and chief executive Karen Thomson says her company will eventually also offer customers line rental.

According to Cesar Bachelet, an analyst at Ovum, AOL has suffered a huge decline in customer numbers in the US and is trying to plug the gap: “It is looking at paying customers and finding ways to boost revenues from them, persuading people to take up optional extras.”

CapGemini analyst Nigel Russell says the long-awaited television services through broadband are finally starting to arrive, and many more will be available from the end of this year.

“ISPs have to work out how to ensure they are gaining customer share of mind, so that they can become a one-stop shop for all those services,” he says.

The fight to become “triple-play” – and quadruple-play, if video-on-demand is included – providers will get fiercer over the next few years, and AOL is banking on the strength of its brand and its access to parent company Time Warner’s entertainment content to help it hold on to its market-leading position.