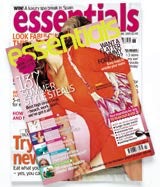 In 2001, when IPC Media shut down the floundering Woman’s Journal, sister title Essentials was put on the “doom-watch” list. The magazine looked particularly vulnerable in a saturated women’s monthly market. Fast-forward four years and Essentials’ circulation figures continue to plunge, but IPC is determined to revive its flagging fortunes.

The publisher is changing Essentials’ format, making it Glamour-sized, and is moving it away from its “knitting patterns and home-made marmalade” image. The redesigned magazine, which will go on sale on June 2, will aim to attract younger 30-something readers and will be backed with a &£1m marketing investment. The cover price will remain at &£2.40.

Marketing will include advertising support in IPC weeklies and monthlies, with the straplines: “The small magazine with big ideas” and “It’s one of life’s little essentials.”

Media buyers, however, insist that while the new format might give an initial boost to the title, Essentials will continue to lag in a sector that develops apace, with recent launches such as Condé Nast’s Easy Living. One buyer says: “The new Essentials seems to be moving in the right direction. I am concerned, however, that – with all the competition out there – IPC is not being radical enough. The magazine should be shut down and relaunched with a new name and image.”

Another buyer says the relaunch is unlikely to bring new readers to the women’s monthly market. “It has become such a dated title since it was launched in 1988. Changing the format is hardly going to revitalise the product,” says the buyer.

According to the latest set of Audit Bureau of Circulations (ABC) figures, Essentials’ circulation is down 14.3 per cent annually, to 128,844 copies a month.

But IPC seems convinced that the “convenience-sized” format, with more fashion, beauty and home coverage, will reverse the slide. Publishing director Linda Swidenbank says: “The new Essentials is dynamic, fresh and bold. Its smaller format fits perfectly into the life of our readers.”

Publisher Ilka Schmitt admits that something radical was needed for the magazine. She says: “The relaunch will attract a new readership for whom the Essentials name is quite relevant to the content – fashion, beauty and home coverage.”

Once called the quintessential domestic title, Essentials was largely a reaction to the influx of German women’s magazines, such as H Bauer’s weekly Bella and Gruner &amp; Jahr’s Prima into the UK. (Prima has since changed hands and is now published by the National Magazine Company.)

It started faltering in the early Nineties, when it was ousted from supermarket checkout positions by retailers’ own titles.

It might be back on the racks, but Essentials faces a hard battle convincing its critics that it is not past its sell-by date.