Three quarters of young adult consumers believe that advertising has the ability to empower women by depicting them in inspiring or respectful ways, according to new research.

A majority believe that the industry should create realistic portrayals of women in advertising, though women are more likely than men to say marketers have the responsibility. The figures from SYN (State of the Youth Nation), a new research tool from YouthSight, tracks behaviours, attitudes and trends among young adults in the UK.

Of the 1,000 16- to 24-year-olds surveyed, 65% agree that the way brands depict women is generally too sexualised with only 14% disagreeing. Meanwhile, over half disagree with the statement that “brands have no responsibility to portray realistic body images and should be allowed to use whichever ad works best”. Just under a quarter (24%) agree with the statement and 23% have no opinion.

Head of youth research and insight at YouthSight Josephine Hansom believes that brands should be looking to identify the pressures that young people face and devise marketing that addresses those issues, one of which is gender.

She says: “We call it owning the moment, where brands identify an issue or problem and try to be associated with a solution or conviction to improve the situation.”

There is a clear gap between the views of young men and women on the subject of feminism, though the majority of men still tend to support making advertising more empowering to women. While 78% of female respondents say that the way brands depict women is too sexualised, just over half (53%) of male respondents have the same view. One fifth (20%) of men disagree with the statement, compared to only 7% of women.

Those aged 18 and 19 have the strongest opinion on women being overly sexualised in advertising, with 74% and 72% respectively agreeing that brands depict them in this way. 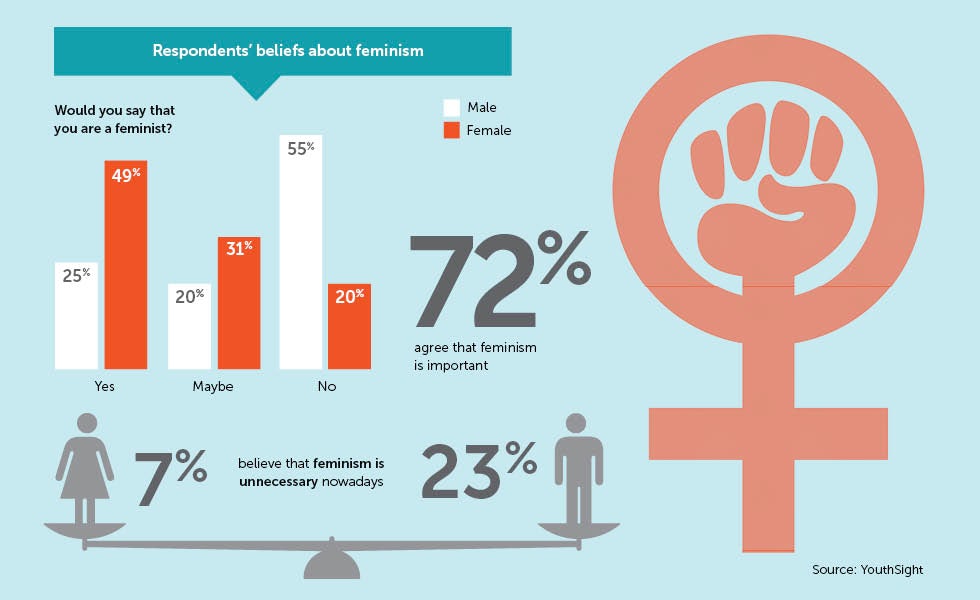 Male respondents are more likely to believe that brands do not have the responsibility to portray realistic body images, but it is a minority of them who feel this way. A third (33%) of men agree with the statement compared to 15% of women.

Older respondents are more likely to say that brands do have this responsibility – 59% of those aged 23 and 24 hold this opinion, compared with 43% of 16-year-olds and 47% of 17-year olds.

Hansom says: “Young people haven’t made up their mind yet. They are more likely to neither agree nor disagree because they either haven’t been exposed to [issues surrounding feminism] or formed their own opinion.”

The study also gives an overview of young adults’ attitudes towards feminism as a movement and shows that it is seen as important but not necessarily cool. “The sentiment of feminism is powerful and is resonating with young people but that could wear off because it’s not necessarily as cool as brands might think,” says Hansom.

Although young women express strong views about how brands depict them and advertising’s responsibility to represent realistic body images, only half say they are a feminist. This figure is 25% for male respondents. However, 31% of women say “maybe” compared to 20% who say they are not a feminist, indicating many could still be convinced to view themselves in this way if given good reason. The group also believes that feminism is needed in the developed world with 74% of women and half of men agreeing. They do not believe feminism is a passing fad: only 5% of women and 17% of men say this.

Almost three quarters (72%) agree that feminism is important, with 82% of women saying this versus 58% of men, and half of the respondents say that it empowers everyone, not just women. But when asked whether being a feminist is cool, people give mixed responses. Over a third (34%) of women and 44% of men say it is not – significantly more than the 20% and 15% who say it is cool. More than 40% of both men and women neither agree nor disagree with the statement, again suggesting potential for many to be swayed by campaigns that take a persuasive stance.

Yet Hansom warns that brands need to be careful about “how far they go down the road” towards strong messaging around gender, comparing the approach of Sport England’s ‘This Girl Can’ campaign to Procter & Gamble’s ‘Like a Girl’ for its Always brand.

Hansom says: “‘This Girl Can’ is softer and offers a real-life solution [for female participation in sport] rather than the powerful gendered universal argument that Always is going for. It is a tightrope and you need to be careful in how far you push it.”