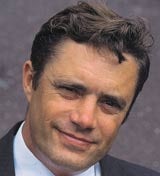 Tipping-points are notoriously hard to notice when they’re actually happening. They’re much easier to spot in retrospect. So here’s a brave (or foolhardy) assessment: the era of retailer power has reached its zenith. Mega-retail brands are at a crossroads. The route they choose over the next couple of years will prove decisive for their long-term viability.

The past decade or so really has been the era of the retailer. Leading players’ momentum is now awesome: If you look at Fortune magazine’s ratings of the Top 50 US companies over the past decade, the biggest stars have been retailers. OK, there are a couple of spectacular technology stories: Dell, for instance, has grown from a $3.5bn (&£1.9bn) company in 1994 to a $41.5bn (&£22.6bn) one in 2004. That’s growth of more than 1,000 per cent.

But hard on its heels is a long list of retailers such as Home Depot (427 per cent) and Lowe’s (412 per cent), Albertson’s, CostCo, Walgreens, Kroger and Safeway.

Then, far behind with sales growth of less than 50 per cent over ten years (not far above inflation) are traditional megabrand manufacturers such as Procter &amp; Gamble, Coca-Cola, Ford and General Motors.

Back in Europe, you find a similar picture. Research by Roland Berger Strategy Consultants shows that Kellogg, P&G, Pepsi, Nestlé, Reckitt Benckiser, L’Oréal, Nike, Kraft, Colgate-Palmolive and Coca-Cola all scraped in with low, single-digit compound sales growth over the five years to 2004. Unilever, Campbell, Sara Lee, Gillette and Heinz didn’t even manage that. Their sales fell.

Now look at retailers such as Aldi, Carrefour, Hennes &amp; Mauritz, Inditex, Ikea, Lidl, and Tesco. They notched up healthy – and profitable – sales growth of ten per cent a year or a lot more.

And it’s not only sales. Ten years ago, manufacturer brands such as Coca-Cola, BMW, Nintendo, Milka and Lila Pause dominated the list of the ten most trusted brands in Germany. A decade later, not one of those brands made the list. The new top ten was dominated by retailers: Aldi, Lidl, Ikea, Media-Markt, Ebay and so on.

You may have noticed I haven’t mentioned Wal-Mart. Let one fact tell its story. In each of the past ten years, Wal-Mart’s sales growth has been bigger than the total annual sales of Coca-Cola. Wal-Mart has effectively created a new Coca-Cola Company each year for the past decade.

So what could possibly get in the retailers’ way? The formula has its own, incredible momentum. Offer superior value to become a destination shop. Use the “I might as well while I’m here” factor to sneak into adjacent markets, and to increase volumes and buying power. Use this power to drive harder bargains with suppliers, thereby offering even better value, and grabbing even higher sales and market share. Meanwhile – and here’s the real twist – find ever greater supply chain efficiencies and use the savings to invest in even lower prices, ratcheting all these effects to a new level.

It’s an awesome formula, but it can’t continue forever. In their day, brand manufacturers had an equally awesome virtuous spiral – developing “New! Improved!” products, advertising them to ensure distribution and demand, using the proceeds to invest further in new product development, marketing and economies of scale, and creating even better “New! Improved!” products at even better prices.

At a certain stage, however, that formula began to run into the sand. Markets matured and saturation, product parity and overcapacity set in. Enter the retailer.

But now retailers are beginning to hit limits. In many countries, retail space is growing faster than sales: overcapacity is setting in. And despite their growth, supermarket juggernauts are losing share to other players in more exciting markets such as leisure, travel and telecommunications. And as growth and profit pressures mount, competition between the leading retail brands grows ever more intense: just look at UK casualties such as Boots, Marks &amp; Spencer and Sainsbury’s.

Meanwhile, as retailers’ power grows, so do regulatory hurdles. Planning permission is now harder to acquire. Monopoly inquiries are a regular feature of retail life, as are codes of practice to reduce abuses of power.

At which we point we hit a crucial shift in the zeitgeist. Until just a few years ago, retailers such as Asda and Tesco could still present themselves as consumer champions fighting greedy brand manufacturers over, say, the price of jeans or medicines or perfumes. Today, however, the mood is shifting decisively.

It has dawned on both the media and the general public that power rests firmly in the hands of the retailer. So the retailer bears responsibility for the things that go wrong… and for righting these wrongs.

This journey from underdog to ogre has been swift and the reputational risk is enormous. Bully-boy supply-chain tactics, questionable supply-chain practices or production processes, the environmental effects of for instance, fish farming, product labelling, workers’ rights. You name the issue and inexorably the pressure-group and campaigning focus is turning away from old targets to the new enemy: the all-powerful retailer.

Not used to hostile scrutiny, most retailers are going to stumble. Just look at the way Wal-Mart is now assailed from all sides – its own workers (over pay), suppliers, environmental campaigners, community activists, town planners. The immediate effect on sales and profits may be negligible, but the long-term effect on brand stature, corporate confidence and management focus will be huge.

And lurking in the shadows is a bigger threat to that critical virtuous spiral. The defining shift of the past few decades was in the centre of market gravity, from the economic priorities of the manufacturer to those of the retailer. Once, retailers were a distribution channel for brands. Then, brand manufacturers became mere “suppliers” to retailers, earning their listings on the basis of their ability to improve the retailer’s profits.

Today, a similar shift is occurring, except this time the emerging central node is the individual and his or her requirements of “personal profitability”. The emerging logic goes something like this: improve my “personal asset productivity” (by helping me to make the most of my money, time, information and so on) and, in return, I will prioritise investment of my various personal assets (time, attention, information, emotion) in my relationship with you.

Companies benefiting from these investments gain increased income, lower costs in acquiring and serving customers, and greater customer understanding, which they can redeploy to improve individuals’ personal asset productivity even further. This represents a new virtuous spiral, built around the economics and dynamics of relationships rather than those of supply chains. The rise of so-called convenience foods, formats and home shopping is just one small symptom of this trend.

Today, the retailers’ momentum looks unstoppable. Certainly, that momentum means the successful ones will hurtle helter-skelter into the future for some time yet. But deep down, things are changing. Retailers that miss this tipping-point could find, in a few years’ time that they’ve been hurtling in the wrong direction.

Cereal brand Kellogg is extending into the hot cereals market for the first time with the launch of hot variants of Coco Pops, Fruit ‘n’ Fibre and Hunny Bs. The products will go on sale this autumn. The cereals, which will be packaged in individual pouches rather than boxes, are made by adding water and […]

The Barclay brothers have completed their acquisition of Telegraph Group for £665m following a ruling from Delaware judge Leo Strine. The ruling rejected former Hollinger International chairman Lord Black’s motion for a delay in order to put the bid to a shareholder vote.

Highgrove Food, the Wiltshire-based dairy company, is launching a range of low-fat dairy products under the Rosemary Conley brand. The range will include skimmed milk, whey-based diet drinks and yoghurt.