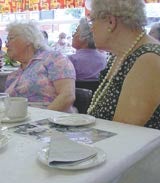 I suspect that all marketers who practise in specialist areas roll their eyes in anticipation of misunderstanding when commentators from outside make forays into the their domain. However, Polly Devaney’s article on the over-50s market made much better observations than most, but with one important exception (MW May 30).

Marketers don’t pursue the mature market because they believe the sector to be unresponsive and set in its ways. Most have not even tried to address it. They choose not to bother because they consider it dull, despite being the biggest, fastest-growing market for mainstream categories. Although Devaney writes about the US, this also applies to the UK.

The reason why marketers, and in particular advertisers and advertising agencies, rarely consider the over-50s is that from the very first stages of learning our trade we are guided towards producing youth campaigns. Like some sort of marketing Holy Grail the generation X campaign is something we must aspire to. The fact that generation X is stony broke and shrinking in numbers is irrelevant.

There are, of course, those who have tested the mature sector and found it difficult. The major communications groups are no exception. Three years ago we witnessed a raft of “grey agency” launches, but they, like most, failed because they tried to apply the principals of the youth markets. The simple fact is that the mature sector responds to communication based on value and benefit rather than brand and image.

However, I am sure that many within those new agencies were not completely devastated by their lack of success. The prospect of having to work on campaigns for the over-50s in years to come and having to share this with their peers was not a heartening prospect, and one that most marketers would rather not share.