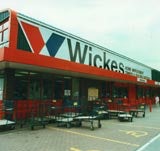 The move is part of a restructure that has also led to the promotion of Wickes trading director Gary West to commercial director. He will take over marketing responsibilities.

Bird is now overseeing the review of Wickes’ 6.5m media buying and planning account, held by WPP-owned Media Insight. The winning agency may also be asked to handle work for Travis Perkins from time to time.

Focus Wickes, now just Focus, sold the DIY retailer at the end of last year for 950m. Wickes had been using Mediaedge:CIA Manchester, which also handles Focus, but moved the business to Media Insight shortly after the sale.

The bulk of the retailer’s marketing has focused on leaflets distributed in store and through door-drops to potential customers, who are traditionally experienced DIYers or tradesmen. Earlier this year, it signed as a second-tier sponsor of the Football League Championship.

Wickes had suffered a 4.9 per cent fall in like-for-like sales over the first half of the year. According to Verdict, the DIY and gardening sector is expected to see a 1.6 per cent decline in consumer expenditure this year.

Carlson Marketing Group has created an integrated campaign to promote Hyundai’s 4×4 range, with the strapline ‘We make ’em tough so you can treat ’em rough’.

Your feature “Advertisers find a new playmate in the computer games industry” (MW August 18) is very perceptive. However, it’s just another form of partnership marketing that brands should be looking at anyway – and many already have been.

Harrison Troughton Wunderman has created a television campaign for a Kronenbourg 1664 competition offering consumers the chance to win a chef, chauffeur or butler for a year.