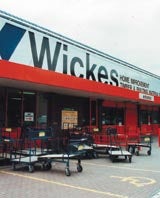 Wickes, the DIY retailer that is part of the Focus Wickes Group, has undergone a restructure, which has resulted in the promotion of marketing director Colin Ball to a group position as commercial services director.

The restructure comes at a crucial time for the group, which is the second biggest DIY retailer in the UK after B&Q, with13.8 per cent of total DIY sales, according to a report from Verdict Research published last year.

Owned by Duke Street Capital and Apax Partners, Focus Wickes was last year forced to postpone a flotation following stock market turmoil. Shortly afterwards, rival Homebase, which had also been expected to float, opted for a trade sale to GUS instead.

With an improvement in the market this year there has been speculation that Focus Wickes will resurrect plans to float. But earlier this month news broke that the retailer is to launch a &£250m bond issue to fund the expansion of the Wickes chain by about 70 stores in the next three years to about 220. It is understood that the structure of the bond issue will preclude a float for the next year.