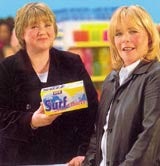 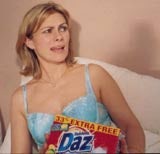 The laundry detergent brand used by a consumer can say as much about income, class and profession as any demographic research.

But this may be set to change as part of a radical overhaul of Lever Fabergé’s detergents portfolio that could, as one industry insider says, “change the way that people look at washing clothes”.

The company has started a wider repositioning of its laundry portfolio with the relaunch of its 50-year-old Surf brand (MW last week). The traditionally low-innovation, value range, which ranks on price behind Procter &amp; Gamble’s (P&G) second-tier brand Bold, but ahead of Daz, will be rejuvenated with a more modern and upmarket brand identity. However, the new-look Surf will not encroach on Persil’s territory as Lever Fabergé’s premium detergent brand.

Price will no longer be a selling point for the brand, with new aspirational fragrances Ocean Clear, Summer Breeze and Forest Rain believed to be replacing the existing line of Cotton Fresh, Sun Fresh and Lemon Fresh.

The third variant, Forest Rain, is to be changed on an annual basis, copying a successful strategy used each year by deodorant brands Lynx and Impulse to revitalise the brands and to stimulate sales.

One retail insider makes the point that it is relevant to compare Lever Fabergé’s plans for Surf with what it has done with its deodorant brands, which use trendy imagery and humour-led advertising. He says Surf’s packaging is to be updated with “funky, young” images and colours, and the advertising will be injected with a sense of fun, in contrast to the value-led advertising of the past.

It can be no coincidence that Lever Fabergé recently shifted its &£8m Surf account into Bartle Bogle Hegarty (BBH), the agency responsible for its Lynx work (MW December 4, 2003).

Hugh Baillie, account director for Surf at BBH, says it is too early to talk about the forthcoming campaign, but adds: “The challenge will be to stand out on the shelf. Brand creation will be key.”

Simon Worthington, head of communications planning for Unilever at Initiative Media, sees the brand evolving. Worthington says: “Surf has followed conventions and protocols developed in the detergents category for 50 years or more. There is a prime opportunity to reinvent where brands sit in this category – and how consumers will see them.”

Lever Fabergé’s shifting of Surf away from a value positioning comes as P&G launches an ad campaign for its Bold detergent that also ditches the traditional marketing tactics of quality or cost.

The ads, created by Grey London, focus on showing an emotional connection by tracing the relationship of a father, a daughter and a T-shirt washed in Bold.

Mark Brickhill, European marketing director for fabric care at P&G, says the ads are “a million miles away from the typical detergent ad formula”. He adds that they reflect a wider revamp of P&G detergent advertising, which will now focus on creating positive emotional links.

“Our approach is changing to create an emotional connection between our brands and the customer, which hasn’t happened in the past.”

But despite this shift in approach, Bold will continue to be positioned below P&G ‘s premium Ariel brand.

David Macauley, chief operating officer of detergent maker Aquados, says these changes reflect a shift in marketing tactics in the detergents category. “The traditional view of the detergents market is starting to erode. It is now about more than just targeting two or three distinct professional classes of consumer.”

But, Macauley adds, Surf’s down-market identity might be difficult to shrug off. And, even if successfully relaunched, Lever Fabergé might risk losing Surf’s core consumer base.

The relaunch of Surf and the repositioning of Bold will mean that only P&G’s Daz will openly target the cheaper end of the detergents market. Anuraag Trikha, Leo Burnett account director for P&G, says that a shift away from the “value-seeker” audience is not a tactic that has been considered for Daz.

“Surf talks to the same value- seekers as Daz, but its message has been lost in recent years. Trying to get ‘funky’ is a risk, as Surf could alienate itself from core customers.”

Trikha says the traditionally “working class” Daz consumer would be confused by a shift of brand identity. Leo Burnett has taken an unashamedly straightforward approach with its “soap opera”campaign for P&G, as it believes Daz’s audience are the type most likely to identify with such television shows.

The latest industry data shows value brands remain popular. Standard powder products accounted for 52 per cent of main wash sales volume, according to TNS Superpanel, and grew by 6.4 per cent last year. But while Daz grew by 7.3 per cent last year, Surf suffered a decline in sales of 4.2 per cent.

A source close to Lever Fabergé says the Surf relaunch has not been motivated by a fall in sales, however, but rather a strategy that will see the brand becoming more important than simply a value alternative in its laundry portfolio.

“The company knows it could lose Surf’s core heartland, but it is willing to take the risk. The brand will be repositioned in such a radical way that it is effectively a complete reinvention. It will be totally different from any other brand.”

Upgrading Surf is just the beginning of a strategy that could also see other brands revamped, he says. “The second-tier brands will act as catalysts for a wider change in the market. No brand will stay still.”

McCallen says Surf will aim to attract consumers through non-patronising marketing tactics that will entertain, rather than preach values of cleanliness. “We want to target the uninvolved in the category, who don’t care about getting the whitest white. They know how to wash their clothes and know that Surf will do it well, but they also want their day brightened up.”

McCallen says that Lever Fabergé does not see Surf as a value brand, although he admits it has been marketed on its “great price” in the past. Surf’s move away from a price-led appeal may also help counter the threat from store brands. Mike Handley, chief executive of own-label manufacturer McBride, says Lever Fabergé needs to keep Surf relevant in a market where value brands are increasingly threatened by cheaper own-label alternatives.

“The value position has been taken away by trusted store brands. Surf has to find a new niche to convince consumers it is still relevant,” he adds.

The category’s lower-priced brands need to refresh themselves, Handley says, or they will lose out to store brands. He adds that Lever Fabergé and P&G will be prepared to throw their considerable marketing might behind the battle.

And it seems this fight will be based on building brand values, rather than value brands. But the jury is still out on whether Daz’s message of making the whitest whites, Bold’s emotional family appeal or Surf’s new image as a funky brand will wash with consumers.