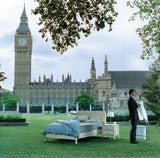 One of the most enduring relationships in the advertising industry could come to an end after British Airways revealed it is to review its &£60m global advertising account, held by M&C Saatchi.

BA surprised the advertising world by announcing on Monday its first creative pitch in ten years. It says it will invite four agencies, including the incumbent, to bid for the brief.

Maurice and Charles Saatchi’s association with the account stems back to their days at Saatchi &amp; Saatchi, which picked up the business in 1982.

In the 1980s, Saatchi &amp; Saatchi created some iconic ads, including the groundbreaking “Manhattan landing” execution of 1983, one of the first global ads from a British agency. It also christened BA “the world’s favourite airline”.

The contract went to the Saatchis’ new company, M&C Saatchi, amid gossip that the decision was as much based on political and personal considerations as business ones.

But times, and personnel, have changed at BA, including the departure of Marshall and appointment of a new chairman, Martin Broughton. British Airways will only say that the review is “in line with our corporate procurement policy”.

The news comes as BA re-evaluates aspects of its business and prepares to welcome a new chief executive.

Former Aer Lingus chief executive Willie Walsh takes over in September, but became an executive board member in May. However, some sources are sceptical that he would have been able to initiate a review so soon.

More significant could be the fact that the airline is developing new first- and club-class products for its long-haul routes, to be unveiled next year. Details are being kept firmly under wraps, but they are believed to involve BA’s “flat bed”.

At the same time, a business review of the entire short-haul operation is taking place, the results of which are also expected towards the end of this year.

Whatever agency wins the pitch is likely to be tasked with campaigns arising from those two developments.

There is already speculation about which agencies will be invited to pitch against M&C Saatchi.

Publicis, perhaps significantly, already does some work for the airline. M&C Saatchi contracts out to it in countries where it does not have an office. Furthermore, Publicis-owned Zenith Optimedia is the airline’s planning and buying agency – its contract is not affected by the pitch.

The consequences for M&C Saatchi if it fails to retain BA will be significant. According to one source: “If M&C Saatchi does lose the account, it will be a huge emotional blow – although not a hammer blow – for the company.”

M&C Saatchi floated on the stock exchange in July last year, and the loss of its founding client could affect the share price – scuppering ambitious overseas expansion plans, according to some.

Just a month ago, M&C Saatchi celebrated its tenth anniversary with a lavish party in Soho’s Golden Square. The loss of its founding account would give the agency a serious hangover to follow the birthday party.