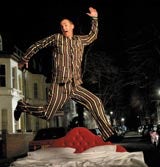 When Andria Vidler takes over the role as head of EMAP-owned radio station Magic this summer she will be facing a very different set of challenges to the last time she was in charge of a major radio brand.

Back in 2001 when Vidler arrived as managing director of 95.8 Capital FM and its FM network, the station’s audience and advertising revenues were both declining, and two profits warnings followed. Four years on and Capital is still battling to hold on to its listeners, but Magic is riding the crest of a wave following its latest set of Rajar figures.

The London station’s 29 per cent year-on-year increase in share of listening hours puts the station just 0.1 per cent behind 95.8 Capital FM.

EMAP has made no secret of its ambition to make Magic the number one station in London, and Vidler has been enlisted to help. The fact that this puts her in direct opposition with her old employer has not been lost on radio industry observers.

Although both sides have always maintained that Vidler’s exit from Capital in 2003 was “by mutual consent”, a radio industry insider describes the time of her departure as “turbulent”. He says: “I think she is still sore about how she was treated by Capital and the job at Magic is an opportunity for her to get her own back.”

But others also point out that she will be charged with developing Magic as a national brand. While Magic is available on DAB digital radio and Freeview in London, outside the capital it is available only on the AM network.

Rob Jones, chairman of radio content producer USP, which works with a number of major stations, says that developing a national brand is Vidler’s challenge at Magic. He says: “Magic is a very solid proposition but it needs to broaden its appeal in terms of marketing, and it needs a wider aspect so that it isn’t just about the music.”

EMAP has restructured over the past year, devolving control for programming and marketing to its individual brands. The process started with the departure of group marketing director for EMAP Performance Malcolm Cox early last year (MW March 11, 2004). This change in focus suggests that it is Vidler’s marketing experience that has led to her being appointed as the brand’s first managing director.

Paul Robinson, a former colleague and previous head of strategy for network radio at the BBC, describes Vidler as a good strategic marketer and adds that she was one of a number of people who helped to change the BBC’s view of marketing.

Gregory says that Vidler will focus on building on the existing strengths of the Magic brand and will be bringing in her own team. But she will work particularly closely with Richard Park, the former Capital Radio Group programme director, who has been a consultant to Magic since 2002. Gregory says: “She knows how to do this job as she has already managed a network. With Magic she will be building a national proposition and a new environment for advertisers.”

And he adds: “I think she is still very BBC-minded; I think she will struggle with the culture at EMAP as it is arguably much harder than Capital. She will certainly find it more brutal. As well as that, she has a big personality and so has Richard Park: I could see the two clashing.”

There are also fears that Vidler may be too focused on getting to number one and beating Capital than on maintaining the consistency of the station’s output. The insider says: “Will she stick to Magic’s values or will the temptation to go after Capital prove to be too much?”

Gregory says there are changes planned for the station in terms of new staff, new talent on air and further investment in the brand. He says: “Expect changes: we will not be about big personalities but intelligent programmes by quality broadcasters. The changes will be seamless, evolutionary.”

Vidler has no doubt drawn lessons from her time at Capital, where complacency across the group about its position in the market allowed challengers such as Magic and Heart 106.2, which briefly overtook Capital as London’s number one station in 2003, to gain share of listening. The group will also benefit from Parkinson’s experience of building up Heart 106.2 as a serious contender and his knowledge of where it all went wrong in the last Rajar, when Heart was overtaken by Magic, again in share of listening.

Vidler and Parkinson are no doubt hoping that Capital’s attention will be focused on its merger with GWR Group, due to complete on May 9, rather than pushing its brands, leaving EMAP a clear path to drive Magic.v