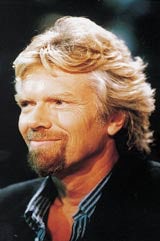 It is no secret that Sir Richard Branson harbours global ambitions for his Virgin Group brands. Further evidence of this came last week, when the company announced it will merge Virgin Direct, which sells its own financial products, and “financial supermarket” Virginmoney into one new brand, Virgin Money, next year, in preparation for launches in Europe, South-east Asia and Japan (MW last week).

Virgin has sold its 25 per cent stake in Virgin One to partner Royal Bank of Scotland, and is tipped to sell its 18 Virgin Megastores in France to Hachette Distribution Services.

It is an open question whether Branson can succeed with his financial services expansion, and indeed his other plans for world domination.

SG Securities analyst John Tyce is pessimistic about Branson’s plans. He says: “He [Branson] doesn’t have sufficient retail distribution. He’s not a recognised name outside the UK. Mr Branson’s balloon has more chance of getting round the world.”

Anthony Thomson, chairman of the Financial Services Forum advisory board, worked with Virgin Group to develop Virgin Direct in the early Nineties. He believes the company needs to take into account the ways in which different markets view the Virgin brand as it tries to sell them financial services.

He says: “The Virgin brand means different things in different territories. In Japan it is seen as upper class whereas in other areas it’s seen as more irreverent and less influential. It’s quite difficult to translate the brand globally.”

Will Whitehorn, brand development and corporate affairs director of holding company Virgin Management, says that over the past 18 months the company has been trying to consolidate global brands in its financial services, telecoms, transport and retail and leisure businesses.

As part of this strategy, the company last month sold 50 per cent of Virgin Energy to London Electricity, leaving the utility company holding 75 per cent and Virgin the remainder.

Whitehorn is bullish about Virgin Group’s future, arguing that as a venture capital company it enters a market, builds up a company and then exits. He says: “We’ve built the brand around the world by doing deals. We almost have one global brand in Virgin Atlantic.

“Our current performance is very strong. We did have some issues to deal with but we dealt with them a year ago.”

Virgin Group is pumping money into new ventures in its four identified sectors. Branson plans to launch Virgin Mobile in America within two years, and in Asia this year. In April Virgin Mobile appointed Brenda Ross as international marketing director to develop these markets. The company launched Virgin Mobile in Australia in October last year, in partnership with telecoms company Optus.

Virgin is also launching Virgin Radio (Asia), with ChinaVest Group as a 25 per cent stakeholder investing &£15m. The move comes despite Virgin Group’s sale of Virgin Radio UK for &£135m.

Launching a mobile phone brand in America will be a challenge even for a seasoned entrepreneur like Branson. Eddie Hold, director of telecoms services at American analyst Current Analysis, says the US market is waking up to the idea of pre-paid phones after traditionally seeing them as a “second class” option.

He says: “Virgin has a huge opportunity to come in with an aggressive marketing strategy,”

But he adds that some very strong US brands, such as AT&T and Verizon Communications, are coming into the market. This may pose problems for Virgin.

He adds: “The Virgin brand is not well-known here. We know the airline, but not the financial services or trains. So Virgin will face more of a marketing challenge.”

Branson has had to make sacrifices to fund his new ventures. Last year he sold 49 per cent of Virgin Atlantic to Singapore Airways for &£550m. He has also had to fight a rearguard action at Our Price, revealing last year that he spent &£150m to save the ailing chain, rebranding half of the outlets to V.Shop.

Virgin Rail has also suffered following the Hatfield disaster. The company’s accounts for the financial year to April show a &£7m loss, compared with a &£28m profit the previous year. It has since received &£115m compensation from Railtrack.

The fate of previous global ventures casts a shadow over current plans. Virgin Cola USA, which became Virgin Drinks USA, was launched in 1998 by Branson driving a tank through Times Square. The US company was wound up in April this year after failing to compete with Coca-Cola and Pepsi Cola, having gained only 0.5 per cent of the market by volume.

And low-fares airline Virgin Express announced last year that it will be halving the number of destinations it flies to.

Virgin also left the European cinemas market in 1999, selling its assets to UGC for &£215m. It is looking for a partner to invest in its five Japanese cinemas.

Virgin Atlantic is currently the jewel in Virgin’s crown. The company this year started flights to Nigeria and Canada, on top of its traditional 20 destinations.

Ironically, the company’s other global brand, the Virgin record label, is now owned by EMI which pays for the rights to use the brand name around the world.

The Virgin Megastores have also helped to increase the brand’s global exposure. As well as the 92 UK stores, there are 19 in America and the aforementioned 18 in France. Megastores are present in 15 countries, although the three Spanish outlets were closed three years ago.

However, Verdict Group chairman Richard Hyman believes the company needs to take a close look at the future direction of the Megastores if they are to grow further: the Internet is expected to account for 20 per cent of music and video sales by 2006.

He says: “Stores such as Fnac in France are more of a melting pot, selling concert tickets and doing live gigs. If Virgin can go down that road then it gives customers more of a reason to visit stores.”

Virgin is undoubtedly a strong brand in the UK, but globally it has yet to make a significant mark. However, the venture capitalist nature of the group means the sands are regularly shifting, undermining the idea that the company is focusing on four key areas.

Virgin wants to be in financial services but has sold off its stake in Virgin One in the UK. It wants to be in leisure but has sold its European cinemas. And with the group using money from the 49 per cent sale of Virgin Atlantic to support existing and new ventures, its control over the Virgin empire is diminishing. Whether Branson can overcome these obstacles to achieve his goal of global domination remains to be seen.