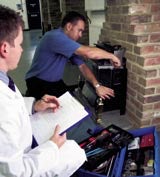 Fresh from its recent slap on the wrist from the Competition Commission over the way it sells extended warranties, Dixons is hatching new plans to expand the breakdown insurance sold through its Currys division to cover all household items.

For a flat fee, paid by monthly direct debit, Currys will offer to insure a range of household appliances – regardless of where the customer bought them (MW last week).

The plan is still on the drawing board, and Currys will divulge little more than last week’s remarks by deputy managing director Peter Keenan, who said: “One of the business development areas we want to explore is electrical, plumbing and central heating support.”

A spokeswoman adds that this is just one area among many that Currys is exploring “in its continuous drive to offer customers value for money and great service”. Other initiatives are believed to include the launch of loyalty and credit card schemes.

For Currys, a move into general household appliance insurance is a worthwhile experiment, which would most likely prove profitable, as the company would be able to make use of its existing Coverplan service infrastructure. Furthermore, it might deflect some of the criticisms that the chain has attracted over its hard-selling of extended warranties, as general household appliance insurance could be presented as better value for customers and is a more considered purchase.

The Competition Commission’s investigation into the selling of extended warranties, published in December, concluded that retailers were operating a complex monopoly that worked against consumers’ interests. The top five consumer electrical chains – Dixons, Comet, Powerhouse, Littlewoods and Argos – made a combined &£760m profit on warranties between 1998 and 2001. The monopolistic nature of the market has enabled retailers to overcharge warranties to customers by up to a third, said the commission.

However, its recommendations for a shake-up in the way warranties are sold are considered to be a “light touch”. Stock market-listed electrical retailers are thought to make anything up to three-quarters of their total profits from the sale of warranties, but the statutory changes announced by the commission in the way the warranties are sold were considered so feeble by the City that the companies’ share prices shot up on publication of the report.

As Ian McDougall, analyst at stockbroker Teather &amp; Greenwood says: “Like its predecessor ten years earlier, the Competition Commission’s report was a bit of a damp squib. I don’t see it as producing a major hit on profits – the worst-case scenario, a complete ban, has been avoided.”

While the previous investigation, in the early Nineties, called for voluntary codes by the retailers, the latest report obliges them to display the prices of warranties alongside goods, and to continue to offer the extended warranty on the same terms for 30 days after purchase if the consumer chooses not to buy it there and then. Consumers will also be given 45 days to cancel their extended warranty if they wish.

However, the recommendations do little to address the major question confronting anyone buying an expensive extended warranty. Why do you need one if the product is of reasonable quality?

The publicity surrounding the commission’s investigation has already hit sales of warranties, which have reached about &£2.1bn a year and provide retailers with profits of &£900m – a massive 45 per cent margin. Comet said in January that it had suffered a downturn in warranty sales, attributing this to the negative headlines.

The Competition Commission says it will look again at the extended warranties market in two years’ time to see whether its recommendations have made any difference to competitiveness. If not, further action could be taken.

As the market leader, with a 23 per cent share of the electrical retail sector (Verdict Research), Dixons Group is the biggest target for criticism over warranties – perhaps explaining why Currys has been so prompt in coming up with this new scheme. Currys could portray multiple-appliance cover as a cheaper alternative to single-item extended warranties, but still make use of its direct contact with consumers to promote the product.

As a British Gas spokesman says: “This is part of our home services and is one of the fastest-growing parts of our business.” He says people are opting for multiple- item insurance rather than single-item extended warranties.

The Competition Commission report pointed out that selling warranties is most successful at the point of purchase. While other companies have offered multiple-appliance schemes, they are few and far between and the providers say that without direct contact with consumers buying the products, it is a hard slog. Norwich Union offers home appliance cover, insuring all goods which are five- to eight-years-old against breakdown at a starting price of &£9.20 a month.

Development manager Louise Spear says: “We market it through direct mail and the internet. Some of the measures announced by the Competition Commission will help customers to find out about other policies and I think this is an opportunity for us. The report is definitely very customer-focused and will help people to find more information and give them more choice.”

Banks Lloyds TSB and Barclays both experimented with multiple-item warranties in the mid-Nineties, following the previous regulatory investigation. These were short-lived and unprofitable forays, however, and the schemes were soon axed. Extended warranties are pressure-sold rather than being left for the consumer to choose rationally. Once a consumer has bought an expensive electrical item, the salesman can plant seeds of fear by alluding to the disasters that can befall the product. “Do you have young children?” is a typical line. Having created anxiety, the seller resolves the tension by offering the protection of a warranty.

The bad publicity that attaches to chains such as Dixons and Currys from regulatory investigations into warranties could harm their long-term brand image. A move into a new, all-encompassing scheme may help to neutralise the negative headlines.

By securing monthly direct debits from customers, Currys would also reach that marketer’s nirvana of being able to have a long-term “relationship” with them, rather than depending on a one-off sell. It’s the kind of extended guarantee of revenue any company would love.