But after two years of decline, the luxury sector expects to see a relative return to glory in 2010. Speaking at the Walpole Luxury Forum 2010 on Tuesday 25 May, Joshua Schulman, chief executive at Jimmy Choo, warned fellow brand owners that: “The younger consumer will shop very differently coming out of this period. It will be very interesting to see how the next generation reacts to retail in general.”

Looking back at lessons to come out of the recession, one of the biggest themes for all brands at the forum was the contraction of luxury retail space over the past two years. As consumers cut back on their spending in 2008 and 2009, larger department stores, particularly in the US, destocked lines and minimised their luxury inventory.

John Ayton, chairman at luxury watch brand Bremont and co-founder of jeweller Annoushka, reported: “What we saw was the contraction of inventory in retailers, which left consumers without control over what they chose.”

He said that many of his competitors had begun considering selling direct to consumers for the first time during the recession as they were unable to get many of their products in front of consumers in stores.

Daniel Gestetner, chief executive of luxury lingerie firm Myla, admitted that his market had suffered from an identical issue. The company decided during the recession to stay supplying retailers in large markets such as the US rather than opening its own stores.

This was a smart tactic given the price of space on high streets, he said, but it did restrict the marque’s growth: “The problem with being in wholesale is the lack of control as a brand owner. Retailers cutting down on inventory means that there is a limit put on consumers’ spending.”

Brands’ perceived powerlessness against the problem of shrunken inventories over the recessionary period will have an effect on the industry in future, concluded Bremont’s Ayton. Businesses selling luxury goods wholesale to retailers are likely to look to diversify their channels more in future to avoid such issues occurring again.

Although Gianluca Brozzetti, chief executive at Roberto Cavalli, said that retailer inventory issues had also been noted at his brand, he felt it had ushered in a new way of doing business that is now perhaps more fitting with the times. He said that a few years ago, a women shopping at Cavalli might spend $8000 on an evening dress; but now people were looking for dresses at $3000-4000.

Four thousand dollars is still a very high price, said Brozzetti, so it should not be seen as moving downmarket. It is merely that brands must adapt to the reality in which they find themselves. If that means putting one less brooch on a gown or using different materials from previously, this is all good practice if it makes sense for the customer. This is all part of a new equation between “price” and “value”.

Jimmy Choo’s Schulman picked up on this point about value no longer equalling price. He said that US retailers were being very clever about labelling various ranges so they do not appear discounted or cheap, but simply great value. “They use names such as “Fab Finds” or “Exclusives for….”, which give them a new way of talking about price,” he noted.

Now, claimed Schulman, people are looking for more value whatever price they pay. So the top-priced goods will still sell and so will the lower-priced ones but all of them have to be more versatile. Someone might be willing to pay more than $1000 for a pair of shoes, but they have to be seen by that customer as versatile enough to warrant that cost.

Myla’s Gestetner agreed, citing a recent tale of a customer in Harrods. This customer had tried on one of the brand’s kimonos, costing several hundred pounds. While this was a high price point, it was seen as too reasonable by the shopper in question, who threw off the gown, complaining it was too low priced to have high enough value for her.

Myla, Bremont and Jimmy Choo did not seem overly concerned about any future rise of the online-only luxury retailers. Cavalli’s Brozzetti said that the internet gave his customers more opportunities to browse the range and find out details that might be very important to making a sale, so it would continue to receive investment.

Schulman said that despite consumers using online services more frequently than ever before, the department store remains his brand’s core channel, particularly in the US, where names like Saks and Bergdorf Goodman dominate upmarket shopping. This means that the relationship between brands and this retail channel remains vital for luxury goods.

So even if the luxury industry has not proved to be as recession proof as was once hoped, it appears that there is enthusiasm for the future among companies such as Jimmy Choo, Myla and Bremont. With large global cuts in public spending by governments all over the world still lying ahead, luxury businesses will be hoping that consumers decide to keep investing cash in their brand of escapism throughout 2010.

The number and breadth of brands involved in Unilever’s acquisition of the Personal Care and European Laundry business of the Sara Lee Corporation will now see the deal analysed market by market by the European Commission (EC). 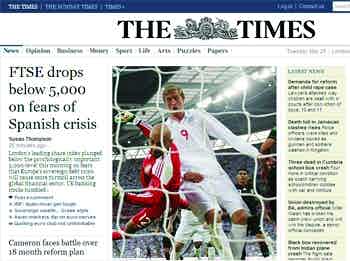 News International unveiled its new websites for The Times and The Sunday Times today ahead of introducing a pay wall for the sites.