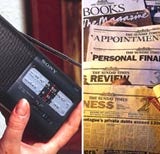 The battle for advertising revenues will intensify next year when the Radio Advertising Bureau starts its second offensive, this time against newspaper advertising.

Fresh from trying to snatch a chunk of television’s advertising pie, the RAB is now planning to convince advertisers that taking a portion of their newspaper advertising budget and investing it in complementary radio advertising will increase recognition rates (MW last week).

The campaign will be backed by research from Millward Brown, which should take about four months to produce over next summer. RAB hopes it will support its anecdotal evidence that combined media strategies work best, and it will be meeting advertisers in the last quarter of the year.

It’s a move that will probably make newspaper owners’ lives harder, but is naturally being well received by their radio counterparts. It’s also likely to be a controversial campaign given the reception of RAB’s first initiative. It was heavily criticised by Carlton Television, which claimed the research, also from Millward Brown, was misleading.

RAB managing director Justin Sampson says anecdotal evidence suggests the campaign has successfully directed ad spend away from TV to radio. But he adds: “We haven’t sought controversy. The general feeling is that Carlton missed the point a bit. We’re showing how radio and TV work together.”

Sampson says the newspaper campaign will argue that radio can direct people to newspaper ads. Financial services, automotive and packaged goods companies will be the main targets as these companies often have to provide detailed information about their products in press ads.

He says: “Radio is good at introducing a company. Press is for people who are interested in learning more about the product.”

Peter Boucher, UK marketing director of share dealing company Self Trade, says the old misgivings about radio advertising will have to be confronted by RAB.

He says: “It seems like a brave gamble. Press works well because you can fit in the disclaimers, but they are awkward on radio. Press work is also cleaner and gets to the audience more easily. And, in terms of response, press is difficult to beat.”

Tim Bleakley, former managing director of The Wireless Group’s sales house Impact, supports the strategy but questions whether it will have the same impact as the television work.

He explains: “TV and radio are both audio, and radio is the TV of the mind, so there’s a link between the two which people who use TV advertising can appreciate. Press is tangible so I don’t think the link is as strong. Clients that use press advertising are also often blinkered about other media.”

But New PHD press director Laura James believes the RAB campaign will make a dent on newspaper revenues, and argues that newspaper publishers only have themselves to blame. “You can’t blame any medium for taking the initiative,” she says. “It’s a shame the newspaper owners haven’t got together to do the same thing.”

Newspapers are unsurprisingly dismissive of the campaign. Guardian and Observer advertising director Stuart Taylor says: “We all try to take money out of other sectors. We’re fair game; we’re just as likely to target radio.”

However, by not having their own version of the RAB, newspapers are looking on the backfoot. Indeed, last week Metro decided unilaterally to run ads in national newspapers encouraging advertisers not to reduce their spend in the downturn.

Taylor echoes James’s concern that the industry needs to take up this sort of initiative through a dedicated newspaper advertising body. He adds: “We’ve got to get more imaginative. The sectors will be competitive next year, that’s logical.”

The economic downturn has seen newspaper ad revenues slump. The Financial Times’ dropped 40 per cent in September, while ad revenue for the Daily Mail &amp; General Trust’s Mail titles is expected to be eight per cent lower for the second half of this year compared with the same period last year.

The radio industry is hurting too, with all the main radio stations suffering in an economic downturn exacerbated by the September 11 terrorist attacks (MW October 25).

But the national newspaper industry does have its heritage as a tried and trusted medium to fall back on. It is the third biggest medium, behind TV and local papers, accounting for £2.26bn of ad revenue. Radio accounts for £595m.

MediaCom head of radio Mike Hope-Milne concedes that RAB will have a job on its hands to win money from press budgets. He says: “It’s the old story. If a brand manager has always done press, he’s never going to get fired by keeping it on the schedule. But if he tries to do something different, it’s on his head.”

However, Jazz FM chief executive Richard Wheatly says the idea that radio can be used to point consumers to press ads is a persuasive one. He says: “Radio is good value for money. It’s a good reminder medium and good at building brand values.”

With advertising spend in decline, all media companies are expected to struggle next year. But with RAB gunning for newspapers’ share of the advertising market, the gloves will almost certainly come off. Perhaps it will spur the newspaper owners to come up with a concerted marketing drive of their own.