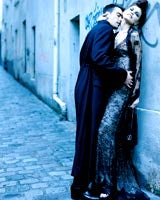 A young couple dressed in their latest designer gear walk into a bar where the beautiful girl orders a cognac and her hunky boyfriend a sherry.

This may seem an unlikely scenario, but if Seagram Wine &amp; Spirits and the Spanish Sherry company Gonzales Pepe have their way, their brands will become favourites in trendy watering holes across the country.

Seagram is going all out to promote its Martell brand, with a &£20m global ad campaign featuring a woman called Martell, a website based around the character’s life and a range of cognac cocktail recipes.

In a similar move, Gonzales Pepe is preparing to relaunch its best-selling brand Tio Pepe with a new bottle and a &£2m ad campaign created by Brandhouse WTS in an attempt to convince people that sherry – a drink more commonly associated with EastEnders’ Dot Cotton than trendy young things – is sexy.

But, given the number of drinks brands targeting 18to 34year-olds are reaching saturation point, can their new strategy succeed?

One industry insider says: “Drinks companies have to realise that they can’t make people drink what they don’t want to. They have to consider the product and think of how they can take the brand forward, whether that means developing a variant or changing the packaging of the original product.”

Research carried out by Tio Pepe’s UK marketing and distribution agency First Drinks Brands (FDB) reveals that most consumers’ perception of sherry is that it is “a sweet, dark, sticky liquid popular with grannies and vicars, drunk at weddings, funerals and Christmas”.

In other words, not the sort of drink you would expect to see in the fridge of young urban professionals, but that is exactly where Gonzales Pepe wants its flagship brand to take pride of place.

“Nobody has invested this heavily in sherry for at least seven years,” says marketing manager for Tio Pepe Jeremy Rockett.

Seagram describes its print and TV campaign for Martell, to promote sherry as a drink for today’s young trendy professionals, as “a radical departure from traditional cognac advertising”.

It claims people are choosing drinks by brand rather than categories, and wants Martell to be the choice for “modern independents”, competing with brands like Absolut.

The spirits company has already launched a range of cocktail recipes using Martell as a base ingredient and is considering rolling out a range of ready-to-drink (RTD) cocktails.

Seagram claims its “bullish” approach to rejuvenating Martell is working and that sales of the brand have risen by five per cent in the UK in the six months prior to February.

John Bilello, group head of Seagram’s cognac group, claims that the strategy has also found favour among the brand’s core market – which in the UK is predominantly female and aged 60 and over.

He adds: “It is about altering people’s negative perceptions. By using an abrupt campaign, and in-bar promotions – which put the product in consumers’ mouths – we are changing that perception.”

Glenn Tutssel, managing director of brand design consultancy Tutssels Enterprise IG, says the increased spending power of the UK’s 18to 34-year-olds is a fundamental factor behind the decision of drinks companies to target this group.

“Drinks such as cognac were once the preserve of the older generation. This is no longer the case,” he says.

Tutssel adds that the challenge facing both drinks companies is to change the way people drink cognac or sherry while keeping their existing market.

“Seagram is trying to change the way that people drink cognac – from an after-dinner drink to something you order in a bar and mix with others to make cocktails – which means it will be competing with other mixers such as vodka and rum,” he says.

“Sherry has an image problem to overcome. I think what Tio Pepe is doing – trying to encourage people to drink it cold from the fridge – will be favoured by 30-somethings.”

Some brands, such as Baileys with its sponsorship of Sex and the City, have managed to transform themselves from being the bottle always left over in the drinks cabinet after Christmas into a young person’s tipple. While gin, once labelled “mother’s sin”, has, thanks to its association with tonic, become a refreshing drink which appeals to both young and old.

But others, such as Bell’s whisky, have found themselves lost in no-man’s land, where they no longer appeal to their core audience and have failed to capture the imagination of their target market.

“Bell’s tried to engage younger consumers a couple of years ago, but the brand message became muddled in the process. It kept its traditional packaging and did not go far enough in advertising,” says Tutssell.

UDV was quicker to react with Gordon’s Gin. After launching a campaign for Gordon’s Gin aimed at the18to 34-year-olds through Leo Burnett in 1999, falling sales forced it to woo back lapsed older drinkers with a campaign through its new agency Bartle Bogle Hegarty.

Seagram and Gonzales Pepe will be keeping a close eye on the performance of their brands over the next few months in case they need to take remedial action to win back their core market if sales begin to fall.