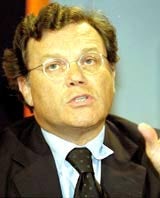 Ever fancied a new name? Nor had the Diary, until recently. What better way to shake off all those irate customers (they were merely accounting suggestions, the Diary never claimed it was legal)? So when a site called whatbrandareyou.com, invented by The Design Conspiracy, went online, the Diary breathed a sigh of relief and took five minutes off from filling its offshore trusts with used fivers.

Having typed in a few particulars (core value: caring; main goal: global leadership), the site generated a new name in a flash… Ridiculus. Oh. Having tried again and been called “Retardo” – and discovered that Sir Martin Sorrell should rename himself “Qualibit” – the realisation dawned: it’s a spoof! Crikey. Such larks from a company that can’t even spell “unfortunately” in its error messages.