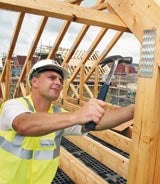 The Thatcher years brought a housebuilding boom of huge proportions to the UK, as the government backed the trend towards home-ownership. Since then, a national obsession with home-improvement has been fuelled by a host of domestic makeover and style television shows and magazines, while Sunday shopping at DIY stores such as Homebase and B&Q has become a weekly leisure pastime.

Now, housebuilder George Wimpey is planning to take on the retail DIY chains with its own outlets, which will offer customers the facility to upgrade the standard built-in kitchens or bathrooms that come as part of the new-build package (MW last week).

Analysts say the UK housing market will remain strong for at least the next six months, as demand outstrips supply – and George Wimpey is reaping the benefits. The company posted a 42 per cent year-on-year rise in pre-tax profits, up from &£86.3m to &£122.7m, for the six months to June 30.

However, in anticipation of an eventual flattening of the market, housebuilders are chasing customers aggressively. Wimpey’s retail scheme is part of its strategy to bolster margins and develop new revenue streams. The company has appointed Jon Kinsey, former group managing director of London Electricity retail group, to lead the launch of the Wimpey outlets, which are to be called Options.

Observers say the move will help George Wimpey to fight negative perceptions: new houses are often seen as small, tacky boxes with fake Georgian porticoes and artificial Tudor beams. This attitude is summed up by fashion designer Wayne Hemingway, who has attacked the “wimpeyfication” of British homes. In a canny piece of PR, Wimpey later enlisted Hemingway to contribute to a Tyneside housing development.

As managing director of customer for life, Kinsey will oversee the launch of six out-of-town retail outlets next year. They will sell light-fittings, garden landscaping, upmarket kitchen appliances, floors and furniture direct to consumers. Customers will also be able to upgrade the standard kitchens and bathrooms that come as part of a new-build package.

One rival argues that this venture is too much of a move away from the housebuilder’s main area of expertise, but Kinsey is confident rival companies will follow Wimpey’s lead. He says: “In the past, the problem has been that housebuilding companies have been construction- or production-led, rather than marketing-led. But because of the buoyant state of the market, consumers nowadays are well-informed and can demand more from the construction companies. This is what we will cater for.”

Trish Henderson, sales and marketing director of competitor Goldcrest Homes, agrees: “Consumers demand so much more than shoddy buildings these days. We have to take marketing seriously and offer what they ask for in a competitive environment.” Goldcrest Homes’ efforts to please customers include private cinemas in its developments, for the exclusive use of residents.

Henderson recently posed near-naked for a Goldcrest press advertising campaign, in an effort to get people “talking about the housing industry”. She says the campaign was aimed at raising funds for charity, and adds: “The ad campaign worked for the visibility of both the company and the charity. As a marketer, I’m aware of the fact that home construction needs to be put on the map, because the industry is certainly not only about selling volume. I see an initiative like Wimpey’s as quite an interesting proposition.”

However, a spokeswoman for Bovis Homes demurs, arguing that Wimpey’s venture is nothing new: most builders already offer kitchens, bathrooms and a limited range of appliances in their sales offices.

Many analysts, however, find it encouraging that Wimpey has the ambition to take on retailers such as B&Q, Homebase and MFI. Verdict Research senior brand analyst Steve Gotham says: “Clearly, the housebuilding business does not have the strong brand-identity enjoyed by the retailers. But if the George Wimpey stores are well merchandised and create an “ideal home” environment, customers will eventually take the idea seriously. I’m surprised construction companies did not take this route five years ago.”

Kinsey is cautious about Options’ prospect, saying that the company will initially not compete with retailers on an equal footing. The marketer, who has in the past been responsible for big advertising accounts for British Gas and also the launch of the National Lottery, adds that Wimpey Homes will not be “wasting” money on advertising.

The company says it has a lavish blueprint for growth, without having to put money behind traditional media such as TV. It is planning to enter the financial services sector, offering mortgages to customers, as well as home maintenance services such as plumbing and heating.

Gotham is convinced that if more housebuilders wooed their customers with retail offerings, they could certainly give retailers such as Magnet, B&Q, Ikea and MFI a run for their money.

But another industry observer says that, because the sector does not devote sizeable budgets to marketing and advertising, it will have trouble shaking off its reputation for providing the public with “ugly” mass-market architecture.

Housebuilders have been known, on occasion, to invest in their brands through marketing and advertising. There have been plenty of outdoor ads in the Docklands for “yuppie” lifestyle properties, while Barratt Homes used to appear on television regularly.

In a more aspirational mode, Bryant Homes, part of the Taylor Woodrow group, teamed up with the Professional Golfers’ Association to sponsor an event designed to attract new customers (MW October 3, 2002).

Modern volume housing will always have its critics. Terence Conran, the man who brought stylish furniture into British homes through his Habitat stores, has been openly disparaging about new developments which are not in keeping with local architecture and landscapes.

Marketers such as Kinsey and Henderson maintain that things have improved. They argue that even the Government is listening and its PPG3 planning directive – designed to increase housing densities – has put added pressure on builders to be innovative and inventive.

George Wimpey’s move into retail could finally mean customers can take stylistic, as well as financial, ownership of their new-build houses, and perhaps rid the phrase “new-build” of its pejorative aura.