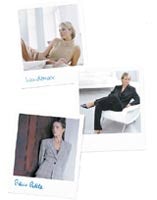 Jane Sebry, former group retail operations director, has been made redundant and former head of marketing Georgina Kelly has left the company without a job to go to. Sebry is believed to have started a new job elsewhere.

A spokesman for Windsmoor says the new management structure will not affect the team at a lower level.

Windsmoor has an annual turnover of £150m. It sells mainly through concessions in UK department stores, as well as through Planet shops and retail outlets.

The group’s outerwear brand Dannimac was sold to Signature Brands International in January for £1.9m.