Oscar Wilde’s maxim, “We are all in the gutter, but some of us are looking at the stars” offers a suitable insight for any marketer seeking to benchmark his or her own remuneration with the results of this year’s Marketing Week/Ball & Hoolahan Salary Survey.

Looking at average salaries and pay rises provides a relatively gloomy picture below-inflation growth and falling fringe benefits. But for any ambitious marketer, it is the top ten per cent of earners who should be used for comparison. While others struggle, the stars are surging ahead, gaining the pay and conditions that still make marketing a desirable career option.

If marketing is a career, it more closely resembles that of a professional footballer or Formula One driver than being a partner in a law firm. Whereas the latter might expect to get continual salary rises with age and experience, and especially with increased responsibility for a larger department, marketing salaries appear to peak early and at smaller scales.

The highest earning age band for marketing directors, for example, is 31 to 35. The average salary at this age is 70,384. Marketing managers also peak at this age with a salary of 40,948.

This may well reflect an increase in the number of marketers taking career breaks, combined with the stripping out of older practitioners. Just three per cent of marketers are aged over 50, giving a career duration of barely 25 years. For all the discussion of grey hair wisdom, this remains a young person’s profession – 60 per cent are between 27 and 35 years old.

This is an extreme compression of the age profile compared with most other professional services. There is also evidence of a golden hello approach to lure young talent, with some marketing directors under 26 earning 68,214, product managers of the same age on 32,000 and marketing services managers of this age getting 41,250. All of these are above the average earnings for their job.

BIG IS NO LONGER BETTER

And while it used to be the case that big companies with big budgets paid the biggest salaries, this may no longer hold true. In this year’s survey sample, virtually none of the marketing directors commanded more than 50m of marketing spend. The highest earning marketing directors were in organisations with budgets of between 10m and 25m.

Marketing managers were spread across the whole range of marketing budgets, right up to those deploying over 1bn, yet this was not reflected in salaries. Although at the top end, the average salary was 46,250, the highest average for a marketing manager was in companies spending 25m to 50m, at 48,200. Only product managers saw incomes peak in line with the highest marketing spend.

For every other function at manager level or above, the reverse was true – non-American-owned companies paid more. Marketing services directors benefited most from domestic ownership with salaries of 59,857 against 46,666 for colleagues at American-owned firms.

Although budget is not an indicator of salary levels, the size of the marketing department is. Across the board, the more individuals employed in the function, the higher the salary.

However, the differential between the largest and the smallest is not as great as might be expected – marketing directors in departments employing over 51 staff earned 78,333 against 58,214 for departments of just one or two people. A difference in scale of 250 per cent, but a difference in income of only 25 per cent.

Product category does make a difference for marketing directors. Three categories (packaged goods, healthcare and services/public sector) offered marketing directors the highest salaries of 80,000, whereas publishing (58,100) and charity (50,000) were firmly in the bottom half of pay scales. Marketing managers and product or brand managers see little variation by sector, however.

There is a clear dampening of optimism among marketers as a result of ongoing re-organisation, headcount reductions and salary squeezes. Marketing departments had been restructured in the past 12 months at 63 per cent of respondents’ companies, while 52 per cent forecast re-organisation in the year to come. But there are signs of a slowdown in the pace of change – two years ago, 71 per cent had undergone restructuring and 55 per cent expected more changes to come.

The tide may also have turned from job losses to a rise in employment. For the past two years, the number of companies at which re-organisation actually involved employing more marketers outweighed those who were downsizing. This year, 40 per cent increased the number of staff against 26 per cent shedding them.

This may account for the job mobility among middle-ranking marketers, taking the opportunity for career progression and pay rises by moving on. Marketing services directors were the most likely to change jobs during the course of this year (57 per cent), together with assistant product managers (52 per cent), product/brand managers (48 per cent) and group product managers and senior product managers (both 46 per cent).

The result is that the majority of these posts are staffed by individuals who have been there for less than two years. By contrast, both marketing directors and marketing managers are becoming relatively static, with the majority holding their current position for more than two years and not planning to move for another two to three years, if at all.

This could reflect pay as much as status. Marketing directors had a high level of confidence that their current company can satisfy their remuneration goals over the next two years (65 per cent), compared with only 46 per cent of marketing managers and 41 per cent of senior or product brand managers. Junior executives and trainees were the most likely to believe they will have to move, as might be expected.

Conflict may be growing between what marketers say they want and what they actually settle for. In terms of the type of job that appeals to them, it most strongly needs to offer opportunities to advance, challenging work, but also a friendly environment (all rated 1.6 out of two for importance). High financial rewards were scored 1.4.

Conversely, greater importance was placed on holiday entitlement (scored 1.4) than anything else. Having a high salary with fewer benefits was rated second (1.2), suggesting that marketers view their jobs more like other workers than they would care to admit as something that pays the bills and gives them as much time off as possible.

This is reflected in the type of benefits that marketers get on top of their salaries. Contributory pensions are the most common, at 80 per cent, but this means one in five are making no provision for later life, despite intensive marketing activity to encourage other consumers to do so.

Performance-related bonuses are enjoyed by the majority, both company (58 per cent) and personal (52 per cent), as is personal medical insurance (52 per cent). But most other types of benefit are given to less than a quarter of marketers. Company cars are rapidly falling in popularity, down to 21 per cent from 30 per cent two years ago.

Fringe benefits, from subsidised food to gym membership and product discounts are on offer to between one-quarter and one-tenth of marketers. Most striking is the growth in childcare contributions, rising to nine per cent from four per cent last year. Marketing is a female profession – 58 per cent of respondents to the survey were women and this is probably still an under representation. Women benefit most from this type of benefit, which is likely to continue to rise.

If more jobs are becoming available, then this could re-introduce to marketing some of the jobhopping for better pay that used to characterise the profession during the 1990s. This remains the strongest reason for changing jobs.

In the constrained environments reported by most respondents this year relatively low pay rises, fewer benefits and low expectations – moving on may be the only alternative. Given the reported 5.7 per cent salary rises reported this year on average, marketers may have to move on in order to move up.

An even sharper spur may emerge if they compare the rise in actual salaries compared to the reported rise. As a whole, the entire sample this year earned 39,407, compared with an allrespondent average last year of 38,157. This represents a rise of just 2.3 per cent. Hardly a motivation for a profession obsessed with the new, improved and better.

The annual salary survey, of which this is the 23nd, has always been acknowledged as an authoritative and unique guide to pay and benefit conditions and expectations in the marketing industry. As well as acting as a benchmark to marketers of their earning power, it is a valuable tool for employers who wish to recruit and retain marketing professionals. Research was carried out by Compass Research. The report is based on 1,057 responses overall (eight per cent), gathered through an online survey in October/November 2005 by Marketing Week of 13,500 readers. The sample was split 42 per cent men and 58 per cent women. Two per cent of respondents held the most senior positions of chairman/chief executive/managing director, while nine per cent were marketing directors. Marketing managers made up the main job function covered (36 per cent), indicating the breadth of roles that this title covers.

In the main version of the survey, there is a full set of tables, including numerous crosstabulations.

Specially tailored analyses are available on request from Hugh Pinnock at Compass Research (01980 619018) or via e-mail: hugh@compassresearch.org.uk or for a copy of the Marketing Week/Ball & Hoolahan Marketing Survey 2006. Tables are priced at 129. 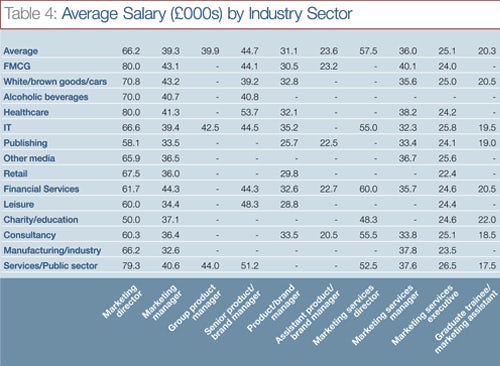 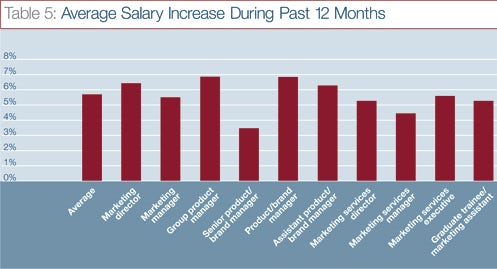