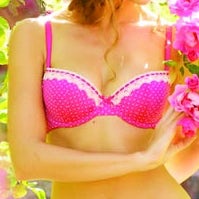 Women dressed in lingerie behind a shop window is something you’re more likely to find in the back streets of Soho than on London’s Oxford Street but that’s exactly what you’ll find at Debenhams tomorrow.

The department store is going to be conducting professional bra fitting on living breathing models in the windows of its Oxford Street store in a bid to convince women that’s it’s not an embarrassing thing to do, get them into the store and buying bras.

Apparently, 85% of women wear the wrong size bra and the majority would rather keep on doing so to avoid having to let another woman into the changing room with a measuring tape.

It may not be the most striking or sophisticated way to dress a window but it is disruptive and will stop shoppers in their tracks and bring them into the lingerie department.

In the days I worked for In-Store magazine, how brands used visual merchandising and window displays as a marketing tool was top of the agenda.

Retailers like Selfridges and Agent Provocateur never fail to impress with clever, edgy and sometimes political window displays that do more than just dress up a mannequin in the latest trends. Good window displays look appealing, but the great ones are those that tell a story, push a message and showed the stores wares at the same time.