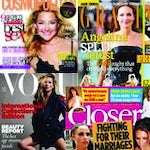 Condé Nast’s Glamour maintained its number one spot with net circulation of 526,216 – flat over the year but up 2.1% in the past six months –  a marked improvement on the decline it reported in the last set of ABC results.

NatMag’s lifestyle monthly Harper’s Bazaar posted its highest ever ABC performance of 118,553, up 7.2% over the period and 8.1% over the year. It is the 15th consecutive increase in circulation.

The title has just launched free spin off title, Cosmo on Campus, aimed at students as part of a long-term loyalty drive to cultivate the next generation of Cosmo readers.

Bauer’s Grazia fell into decline over the January to June preiod, down 0.4% to 228,770, but remained flat over the year.

Hachette Filipacchi’s lifestyle title Psychologies was close behind falling 9% to 119,025 (8.9% over the year).

Nadia Dawson, Publisher of Red and Psychologies says she expects Psycholoiges to pick up in the second half of the year

“We are confident that the changes we are gradually introducing to reinvigorate Psychologies will reap positive rewards and grow our audience of intelligent, up-market, life-curious women in the second half of the year,” she says.

“These healthy ABC figures reflect the extraordinary hunger for our brands from both consumers and advertisers. I’m also delighted to see fast growing subscriptions sales for two free magazines”

It is the fourth biggest magazine sector, following TV listings, cookery and kitchen and women’s weeklies.