Women’s sport is set to enter a “new era” following the Lionesses’ historic victory over Germany in the UEFA Euros final.

A record breaking 17.4 million people watched yesterday’s (31 July) final live on the BBC, with a further 5.9 million streams of the game via BBC iPlayer and the BBC Sport website and app.

The TV viewers were in addition to the 87,192 fans at Wembley Stadium, breaking the Euros attendance record for both the men’s and women’s tournaments.

Add to the UK viewership a reported 17.9 million strong audience who watched the match in Germany and you begin to understand the importance this single match looks set to have in increasing the visibility of women’s sport.

The final was the most-watched women’s football game on UK television ever, smashing the peak audience of 11.7 million who watched England’s World Cup semi-final defeat to the US in 2019. Furthermore, the Lionesses’ victory is the BBC’s most-watched programme of 2022, eclipsing the Platinum Jubilee Party at the Palace celebrations in June, which peaked at an audience of 13.4 million.

Whilst we celebrate the incredible win that captivated the nation last night, we need to also recognise that momentum isn’t a given.

Women’s Sport Trust co-founder and CEO Tammy Parlour believes the Lionesses’ success has “thrown us into a new era” for women’s sport.

“This isn’t just about visibility though; this will help us to make steps towards women’s sport becoming viable with more sponsors and increased brand engagement,” she says.

“Whilst we celebrate the incredible win that captivated the nation last night, we need to also recognise that momentum isn’t a given and Women’s Sport Trust will continue to drive progress in this area and make sure we see lasting change and an industry that is fully representative of our society. I’m excited about the future of women’s sport.”

Brands have been quick to show their appreciation of the Lionesses’ achievement. Tournament sponsor Starling Bank, which made its sports sponsorship debut with the Euros, tweeted in celebration of the “Record Breakers. History Makers. Champions”, calling out its brand ambassadors winger Lauren Hemp and midfielder Jill Scott.

Brand and marketing director at Starling Bank, Rachel Kerrone, explains the bank sponsored the Euros because the tournament aligned with its mission of “lifting women up and smashing glass ceilings”.

The bank’s ‘Our Time’ campaign championing women’s football culminated with an outdoor takeover of Old Trafford Stadium and the fan zone in Trafalgar Square ahead of the final. Starling hosted family-friendly activities at the FA’s fan parties, developed the first ever Fantasy Football game for the Women’s Euros and planted 50 trees for every goal scored, taking the total to 2,700 as of 27 July.

Crucially, the bank also donated £28,000 to Sports Aid and grassroots teams across the UK to develop the pipeline of female footballing talent.

“The fact that it was the first international win for the Lionesses and the biggest women’s tournament to date suggests that things are changing for women in sports, banking and technology – the cracks in the glass ceiling are beginning to show.”

Fellow tournament sponsor, LinkedIn made its first foray into sports sponsorships after seeing a “huge increase” in the number of sporting professionals sharing stories on the platform. Building on its work in support of International Women’s Day in March, LinkedIn says it is seeking to champion a more equitable world of work.

The heart of its campaign featured a partnership with Carol Thomas, the first captain to lead England to a Women’s Euros in 1984. LinkedIn UK head of brand marketing Zara Easton was joined at the final by Thomas, who remarked that in the Lionesses’ triumph “38 years of hurt” had disappeared.

“Last night something big happened,” says Easton. “With over 17 million people in the UK tuning in to watch the game, including the countless families and young girls, we couldn’t be prouder of our partnership with this historic sporting moment that has been an inspiration to so many.”

The sponsorship has been a big success both in terms of brand awareness and in continuing our brand mission.

The LinkedIn marketing boss believes that regardless of which team won, the tournament represents a “seismic shift” in attitudes towards women in sport.

“Our commitment to shining a light on female trailblazers will continue proudly and we must continue this momentum,” Easton adds.

Kit sponsor Nike created flags and T-shirts for the squad to wear on the pitch at full time, featuring the brand’s famous swoosh and the word ‘Home’, a nod to the iconic phrase from football anthem Three Lions. The sportswear giant followed up with a press wrap of the Metro newspaper, celebrating the names of the full squad.

Speaking during Nike’s fourth quarter results in June, CEO John Donahoe said he had loved getting the chance to spend time with the Lionesses, who he described as “inspiring” in their preparations for the Euros.

The fourth quarter was the sportswear giant’s biggest three months for its women’s division, led by sales of performance running, classics and lifestyle apparel. Nike has since reaffirmed its long-term commitment to making an impact at grassroots level, fuelled by its “goal of empowering the next generation of women in sport.”

Tournament lead sponsor Pepsi Max was another brand to riff off the iconic Three Lions refrain by projecting the words ‘It’s Home’ – with the word ‘coming’ scrubbed out for artistic effect – on the White Cliffs of Dover and in the hometowns of the players.

Others have been quick to capitalise on the Lionesses’ route to the final. Royal Mail celebrated the fact football has ‘come home’ by sharing an image of a ball, wrapped in brown paper and two first class stamps, addressed to: Home.

Heinz congratulated the Lionesses with a nod to the amount of time it has taken the brand to create its own Bolognese pasta sauce, with the words: ‘Sometimes the wait makes the result taste even better! 150 years after inventing the beautiful game, football is coming home again.’

Then there was Specsavers, which reworked its eye test ‘It’s Coming Home’ creative from the Men’s Euros last summer by scrawling on the words ‘actually’ to give the outdoor campaign added oomph.

Market research group System1 measured the effectiveness of the Weetabix, Sainsbury’s and Specsavers ads via its Test Your Ad platform, which analyses the emotional response to the ad to produce a star rating out of five.

All three ads landed in the top 25% of global static adverts, with Weetabix scoring 3.4 out of five, followed by Sainsbury’s at 3.1 and Specsavers at 3.

The 2022 Women’s Euros has attracted thousands of new fans and an array of new sponsors, but maintaining momentum will be crucial if women’s sport is to treble its value to £1bn by 2030.

Today, FA chief executive Mark Bullingham told the BBC England’s victory is a chance to “turbocharge” the development of the women’s game, adding that there is “no reason” why the same number of girls shouldn’t be playing football as boys. The FA’s ambition is for 75% of schools to provide equal access to football for girls in PE lessons by 2024, up from 63% today.

While the record attendances for the Euros are encouraging, interest will need to be maintained week in, week out in the domestic season. The landmark £8m-a-season, three-year deal signed between the WSL, BBC and Sky Sports has a big role to play in making women’s sport more accessible to wider TV audiences.

Value of women’s sport could treble by 2030 as UK

The WSL and new format cricket tournament The Hundred, which returns this week, were the main drivers of growth in viewership of women’s sport in 2021, according to the Women Sport’s Trust ‘Visibility Uncovered’ report published in February.

Some 6.2 million people watched live WSL broadcast matches in 2021 without watching a Premier League game on TV, suggesting there is a core audience emerging for women’s football. Crucially, the WSL is providing a gateway to wider consumption of women’s sport. In 2021, there were 5.9 million new viewers to the WSL who had not watched any other women’s sport prior to the start of the season.

With the Commonwealth Games in Birmingham running until next week, (offering more medals to female athletes than male) and another home tournament on the horizon with the Women’s Rugby League World Cup this autumn, there are many opportunities for brands to seize on the excitement and turbocharged fandom around women’s sport to help the sector achieve its £1bn target.

The scale of the opportunity was alluded to by former Lioness and BBC presenter Alex Scott. During coverage of the final last night, Scott said she is not prepared to continue standing in front of sponsors, “begging for them to get involved in the women’s game”, adding: “You know what? If you’re not involved then you’ve missed the train, it’s finally left the station and it’s gathering speed.”

The record TV and live audiences, not to mention the Lionesses’ historic win, should be proof enough to brands that now is exactly the right time to invest for the long term in women’s sport. 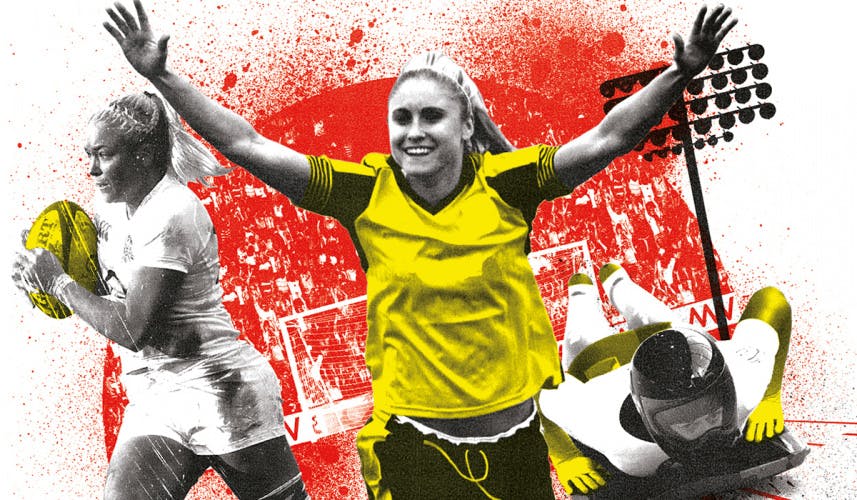 With statistics revealing a record 32.9 million people in the UK watched women’s sport in 2021, broadcasters and brands have a significant role to play in helping the sector achieve its £1bn goal.